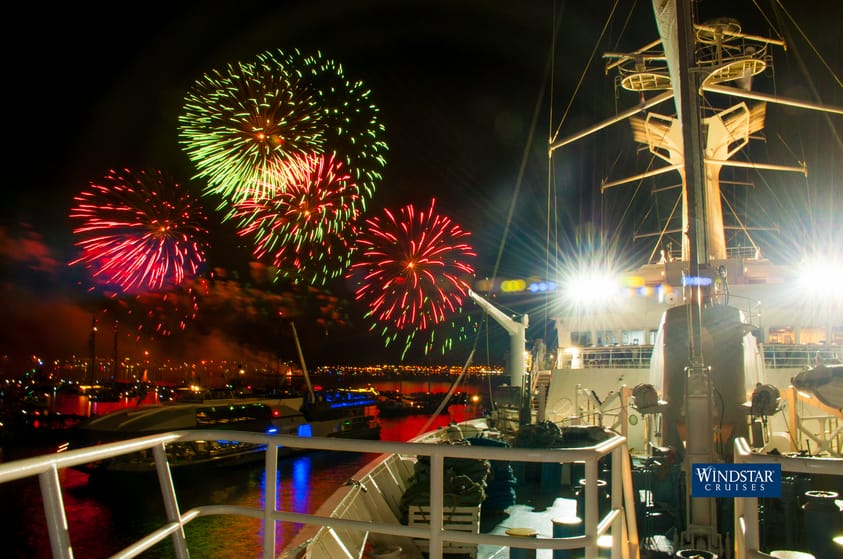 Wind Surf recently sailed one of Windstar’s newest itineraries in Northern Europe: the “Windmills and Tall Ships” voyage, which featured an incredible front-row view of the twice a decade event SAIL Amsterdam: Parade of Tall Ships.

And as one of the largest sailing yachts in the world, Wind Surf knows a thing or two about tall ships…

Windstar’s Director of Maritime Operations Sander Groothuis was on board to observe the festivities, having finagled Windstar’s participation in the event with a process that started almost three years ago (thank you Sander!). While the original plan was for the yacht to sail as the “big finish” to the parade, a few logistical components called for a change in operations.

“We realized our guests would be waiting on the yacht all day for the other 600 ships to parade from the lochs and into the harbor, and that didn’t seem like a great way for the guests to spend their time in port,” he explained. “Especially for those who wanted to spend time on shore and experiencing the destination as well.”

As a logical compromise, the yacht was instead anchored in the middle of the action (a “tricky” parking job for any captain to accomplish), with Windstar as the only commercial cruise ship present at the event that drew a whopping 2.2 million visitors over five days. Guests were able to watch the parade from the yacht’s deck – a totally unique water-front vantage for the event – or they could board tenders to port and explore the watercraft for themselves.

Windstar guests had two days to enjoy “anything that floats” as Sander says, with an array of vessels ranging from historic tall ships to local sailing boats to antique steam vessels. A true highlight though was the signature Windstar on-deck BBQ, followed by a stunning fireworks display over the harbor.

Anxious to experience this sailing in the future? Sander says Windstar is looking into returning next time (in five years), pending approval from the local organizers of course. Fingers crossed we get to return.

For a more personal, in-depth look at this experience, see below for a first-hand account from our guest speaker Joseph Novitski, the author of “Windstar; The building of a Sailship”.

Entering a harbor from sea at night is like stepping into a darkened dining hall and finding your seat by candlelight alone. Each light in front of you has a meaning. Some of the lights move; some stand still. Some of the lights flash; others burn steadily, and all of them are reflected from a shimmering surface: the water in the port.

Just before 4 on a Wednesday morning, there were no spurious lights facing seaward from Ijmuiden, the entry port from the North Sea to Amsterdam; no lighted billboards or empty office towers glaring at the night. A lighthouse with a turning white light stood at the end of a low breakwater. Flashing green and red lights marked the dredged ship channel curving past sandy mudflats where sea gulls floated in the shallows, sheltering from the ebb tide behind lighted buoys. The ship channel ended at the lock that lowers inbound ships to the level of Holland’s inland seas. The lock gates stood open. A large traffic light showed green. A flat path of seawater glimmered between two concrete walls.

Wind Surf, one day out from Christansand in Norway up in the North Sea, slid her 540 feet into the lock at just under two knots. As she slowed to a stop, Dutch line handlers stepped out of the dark ashore, into the light shed by street lamps parallel to the lock wall. The line handlers took the ship’s mooring lines to bollards and she was made fast. The lock gates closed astern. The water level dropped six feet and the inland gate opened. Wind Surf took her lines back aboard and accelerated slowly into the North Sea Canal, bound for Amsterdam and the Tall Ships Parade. Passage of the lock took 13 minutes. Amsterdam was an hour and a half away in the dark.

Everyone knows Amsterdam, the Venice of the North. It is a city of museums, which is almost a museum in itself. A place known for gay pride, for beer bars and weed bars and parties with a red light district organized, controlled and sold as a tourist attraction. The world flies into Amsterdam. Coming from the sea, however, one sails through the foundations of the great city’s past and through a cross-section of Holland’s modern wealth.

Sailing inland on the North Sea Canal at night is to move through a highly engineered countryside, half land, half water; and into a country planned for prosperity. The land is fully occupied; the water is controlled. The Dutch say that God created the earth but the Dutch made Holland. Industry of all kinds is arranged in in distinct rings at a distance from cities and towns, with the heaviest and most polluting the farthest from urban centers. Coal-fired power plants and the loading docks that feed them with imported coal are at the seaward end of the canal. Moving inland, cargo terminals and dockyards come next. Containerships are on one side of the canal; ships dry-docked for repairs on the other. Next inland, petroleum terminals, refineries and tank farms line both banks. Then come miles of new industrial buildings, supporting maritime and inland commerce. Manufacturing, building and hauling companies with office and factory space show well-maintained faces to the canal. Finally, in the last bends before Amsterdam, there are apartment blocks and parking lots, little marinas and canal side ferry stops.

A green strip of willows and plane trees, grass and poplars, runs the full length of both banks of the North Sea Canal. The night was so silent as we passed that I could hear a dog bark on one shore, and a motorcycle whining through its gears in the night on the other. The bow waves from passing cargo barges rippled audibly away from their long, low hulls. At the northeastern edge of Amsterdam, where sailing cargo ships once anchored, Wind Surf spun in her own length and anchored, moored fore and aft at 5:30 AM, in water so shallow the ship had three feet beneath her keel at low tide.

All morning small motorboats, sailboats, yachts, cabin cruisers and outboard dinks, traditional wooden Dutch sailboats and glass-enclosed tourist and party barges sailed past the anchored cruise ship, bound to the west along the North Sea Canal to meet the incoming parade of square-rigged training ships from Holland and Norway, Russia and Poland, and Ecuador, Chile and Colombia – the Tall Ships of Sail Amsterdam 2015.

Beginning at noon, the sailing ships moved very slowly under engine power along the same route Wind Surf had covered in the pre-dawn dark. A confused and confusing cloud of watercraft of all sizes surrounded each of the parading ships. Tugs pulling at the 300-foot-long Russian bark Kruzenstern brayed with their horns repeatedly as they tried to work that ship into a berth along the dock set aside for the visitors. The afternoon faded, the tall ships were all docked successfully and still the small craft kept coming. There were luxurious modern powerboats, designed to slip under low bridges in Amsterdam’s canals, beautifully maintained power yachts and motorboats from the 1920s and 1930s, traditional tugs and cargo barges converted into private yachts. Each sailing barge had rigged a clothesline of clean laundry, undershirts, shorts and shirts, between their masts to signal that they were family-owned. Every boat, even the outboards carrying two people, had a party on board.

Finally, the princesses of the parade that day came to the chaos floating around the stationary Wind Surf: trading schooners and brigs and brigantines, their sails all furled, joined the slowly-moving circle of more than a thousand boats, all maneuvering scant yards from each other for positions from which to watch the evening’s fireworks. None were permitted to anchor. All maneuvered constantly. And when night finally fell, any one with a knowledge of boats and sailing had a measure of Holland’s riches. I counted 13 beautifully maintained traditional small ships – antiques, really – over 80 feet long. All of them were privately owned. The first thing that comes to a modern sailor’s mind is the immense cost of restoring and keeping boats like those. The next and final thought is gratitude that someone has the money to do it.

The fireworks went up after ten, from a man-made island in open water between the city and the inland sea. They were spectacular. And within 20 minutes all of the thousands of boats around Wind Surf had left, disappearing at speed into the city canals of Amsterdam , turning west into the North Sea Canal, or fading north and east into the Dutch inland sea.

A great time was had by all of this on this cruise last month!

This cruise was one of the highlights of our lives!!!!!! And THANK YOU JOE for your details about the entry into Amsterdam Harbor!! I must admit, I was asleep . . . . . . It was such fun, and the memories will last forever. And THANK YOU WINDSTAR and Sander for this adventure!!

Thank you, Melinda! It was a highlight of Wind Surf life as well. We are hoping to return to SAIL Amsterdam in five years. Will let Sander and Joe know about your comment.

The whole experience was fantastic from start to finish of this cruise…..fingers crossed for sail Amsterdam 2020.

Looking forward to the next edition 🙂