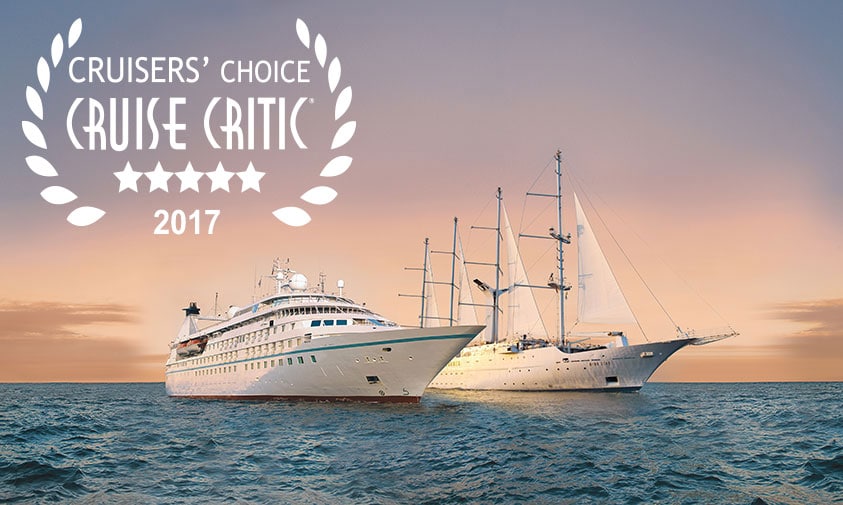 Winning the Cruise Critic Cruisers’ Choice Awards is prestigious as it’s based on each cruiser’s personal review of the cruise line.

“I cannot wait for my next Windstar Cruise. They exceeded my expectations by far, and I would venture to say there is no better bargain right now in the small ship category.” – JoanneCam

“Embarkation and debarkation are a delight–so quick and easy! You have to love these smaller ships–the experience is intimate and very calm.” – suzeshoes

“Excellent food, excellent music by “Splash” and great entertainment from the staff. We’re looking forward to booking the next cruise!” – traveler9

“The yacht had a large water sports platform where you could swim or kayak when the ship was at anchor. The gym was well equipped.” – pwchief

“The public areas are amazing and they are constantly cleaned and polished.” – sealord

“It’s a very personal and luxurious experience when everyone working on the ship remember your name and seemingly anticipate your requests.” – shipmenus

Star Breeze was awarded #3 for Best Cabins. This is interesting to us as cabins on all three ships (Star Breeze, Star Legend and Star Pride) are identical and even went through interior transformation at the same time.

“The best cabin we’ve ever booked. Very spacious, plenty of lights and outlets, and the separate seating area was nice” – LTC Dan

Wind Surf has been awarded the most. It is rated number one as Best Small Cruise Ships for Dining. Also Wind Surf took second position for Best Overall in Small Ship Category, Best for Fitness & Recreation, and Best for Value. It also rated in the top five small ships in Best for Public Rooms, Best for Service, Best Cabins, Best for Entertainment, and Best for Shore Excursions.

“I honestly couldn’t have imagined fresher, more appealing meals than all of those that were offered — I can’t think of one that wasn’t really delicious.” – ladyprof14

“Windstar came through with flying colors!!!!! This cruise showcased the Windstar experience we have come to know and love.” – stcruise

“Also, the crew show was WONDERFUL. We really enjoyed it…there’s some great talent on board.” – AniW

“Well designed and meticulously cared for, it motors well and sails well. Despite its large size there are so few passengers that there are always lots of places to sit either inside or on deck.” – Sailor dogs

“Every single crew member treated us like we were the most important people on board and it was wonderful.” – Sailor dogs

“When you consider the itineraries, price and service, they offer a great value.” – Twocoasts

Windstar Cruises is is thrilled to have won so many honors and truly appreciates every review by our Yacht Club Members!

ALL categories – 3 of our ships placed as follows across all categories; 8 awards in top three.

How the Awards are Chosen:

The 2017 Cruisers’ Choice Awards are based solely on the thousands of reviews received from cruisers who sailed in 2016 and submitted a cruise review on Cruise Critic including ratings based on their experience. The awards position the top five ratings that then determine the rankings in the Cruisers’ Choice Awards. The categories reflect cruiser review ratings by category and include the top rating/award for “Best Overall” experience in one of four ship size designations; Windstar competes in the Small Ships division.

Additionally each category ranks various ships in the top five. For example, Windstar Cruises Star Legend was rated the highest out of all small ships in the Cabin category, while Star Breeze came in just behind at #2 and Wind Surf also was recognized with the #4 Best Small Ship Cabin ranking.

One difference to be aware of this year is that Cruise Critic separated out the small ships (under 400 guests) from the Small-Mid-sized ships (400-1199 guests) to make it more helpful for people who want to compare a more similar experience.   The other sizes are Mid-Sized (1200-1999 guests) and Large (2000+ guests).

Did you review your Windstar cruise experience on CruiseCritic.com?