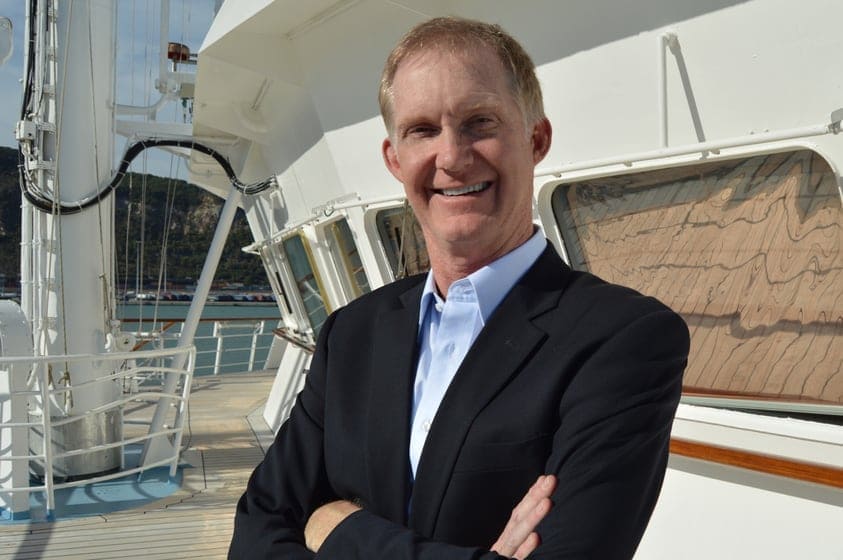 Hans Birkholz, Windstar Cruises’ CEO, recently coined the Islands of the West Med as one of his top voyages. Hans, an avid foodie, shares his insider culinary tips for this signature Windstar voyage.

“What is so wonderful about Islands of the West Med is you get an authentic flavor of the Mediterranean. It’s a great cruise to sample and taste local dishes.”

Once you’ve worked up an appetite walking around the quintessential port town of Portoferraio, Italy, (making sure to visit Napoleon’s house), stop by a little restaurant called Lido Ristorante. Located in the historic center at the foot of the Falcone stairway, this bistro has the most amazing seafood. I ordered squid; it was grilled perfectly, with just a touch of Italian olive oil. I paired it with a glass of crisp white wine; it was the perfect combination.

Sóller, off the North West coast of Mallorca, in the Balearic Islands of Spain, is the perfect place to sample Jamón, the cured ham that the Spanish are known for. Once you’ve taken the funicular up to this picturesque Spanish town, I recommend going into one of the tiny shops or restaurants to try tapas, specifically Jamón. My personal favorite is Cinco Jotas Jamón (Five Stars Ham), the flavor and texture is so good that it literally melts in your mouth.

Alghero is a unique corner of Sardinia, with both Italian and Catalonian influences felt here. I went on a Windstar shore excursion in this port, The Taste of Sardinia.  The tour took a panoramic drive to Capo Caccia, a village on the southern point of a huge limestone that juts out into the sea. We then stopped by Leda’ D’Ittiri, a local winemaker’s farmhouse for a tour and of course, some tasting. I sampled a variety of wines, including Bosana, Carolea, Nocellara, and Frantino. The wine was fantastic, and the vineyard was beautiful.

Porto-Vecchio, a tiny town on the French island of Corsica, has some of the most beautiful beaches, with crystal-clear water. It’s also an ideal place to eat classic French steamed mussels. I stopped at a tiny restaurant called Le Grilladin and had the best dish of mussels. The mussels were extremely fresh and steamed with just the right amount of garlic, white wine, and butter.

Barcelona needs little explanation, being the cosmopolitan capital of Spain. Every corner is filled with bistros, markets, and shops. One of my most memorable meals was at La Boqueria, the largest market on Las Ramblas. After exploring the different stalls of fresh fruit, vegetables, meats, and cheeses, my wife and I sat down in front of a seafood stall. We filled our plates with shrimp, squid, and freshly caught fish, all dressed simply with lemon. It was perfect.

Explore the beautiful Islands of the West Med voyage which departs from Barcelona to Rome (and reverse) on Wind Star on November 2, 2013 and April 20, 2014.  This six-day voyage departs from Barcelona and visits Sóller, Spain; Alghero and Portoferraio, Italy; and Porto-Vecchio, France before ending in Rome, Italy. Click here for more information about this itinerary.