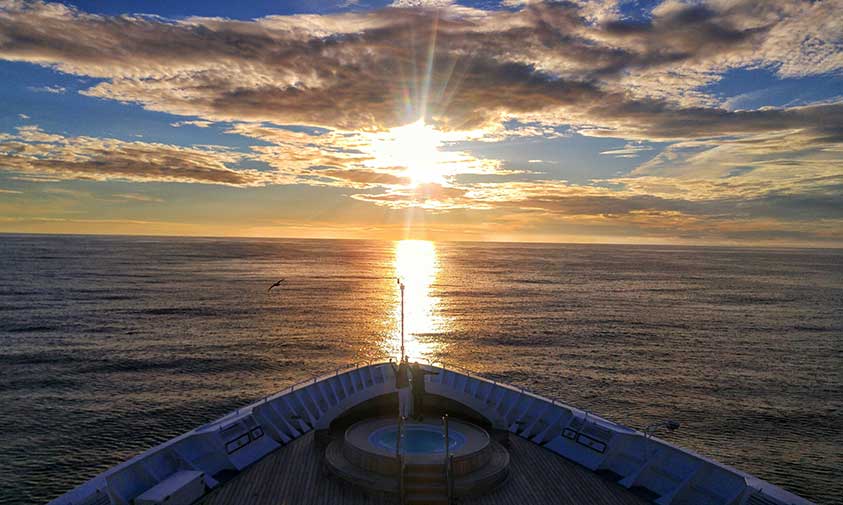 Summer is the most magical time of year to visit Northern Europe, the land of the Midnight Sun. Whether you choose to cruise the Stockholm archipelago, explore the aftermath of an Icelandic volcano, savor the style of an Art Nouveau port or simply enjoy the splendor of Norway’s fjords, the wild beauty of Northern Europe is unforgettable.

Here are seven remarkable experiences to enjoy on a Windstar cruise in Sweden, Norway, Denmark, Finland, Russia or Iceland.

There is no shortage of fjords in Norway, but Geirangerfjord stands apart. This UNESCO World Heritage Site boasts countless dramatic waterfalls, with nicknames like Seven Sisters, Bridal Veil and Suitor. The sheer cliffs, remote mountain farms and porpoises frolicking off the ship’s bow add to this fjord’s drama.

In the midst of Norway’s natural beauty lies the coastal town of Alesund, an astonishing treasure of Art Nouveau architecture with storybook turrets, spires and lovely ornamentation. Still very much a working fishing port, Alesund is built on several islands and surrounded by snow-capped mountains. A stroll through its artfully preserved streets confirms why it’s been voted Norway’s most beautiful town.

The extraordinary wild beauty of the Faroe Islands, a self-governing Danish archipelago, is distilled at the Vestmanna Sea Cliffs, which can be easily reached by boat. Thousands of sea birds, including puffins and guillemots, inhabit the dramatic cliffs that rise 1,500 feet from the sea and the dramatic grottoes that the Windstar yacht navigates on this excursion.

Cited by National Geographic as one of the “25 Wonders of the World,” the geothermal seawater springs of the Blue Lagoon are not only UNESCO-designated but have proven therapeutic powers. Soak blissfully under a bright Icelandic sky followed by a session in a sauna, a steam room or an in-water massage.

Attend the Ballet in St. Petersburg

Dubbed the Paris of the North, St Petersburg is famed for its majestic architecture, the long “White Nights” of summer and as the home of classical ballet. Attending a ballet at the Theatre of Musical Comedy and exploring this architectural masterpiece from 1929 with a glass of champagne in hand is a delightful way of appreciating this historic Russian city.

One of the most remarkable ways to explore the beautiful archipelago of Helsinki is from the water, in a stable sea kayak. Just minutes from the bustle of downtown Helsinki is a peaceful world of hundreds of islands and remarkable bird life. With the expertise of a seasoned guide schooled in the archipelago history, the Finnish cultures and landscape really come to life.

Visit the Pompeii of the North

When Eldfell volcano on Heimaey Island in Iceland erupted in 1973, it was a landmark in geological history. The power and the fury of the Eldfell explosions can be seen at the Eldheimar “Pompeii of the North” Museum, which opened in 2014 to showcase the history and aftermath of the eruptions that affected the island’s 5,300 residents.

Norwegian fjords, the remote Faroe Islands and the dramatic fire and ice landscape of Iceland are at the heart of Windstar’s Lands of the Midnight Sun cruise. A well-planned voyage on the Baltic Sea is how Windstar brings its seafarers to Oslo, Stockholm and Copenhagen on the Scandinavian Tapestry cruise. A variation on that Nordic theme is Baltic Delights, where St. Petersburg is the glittering jewel in the itinerary. Finally, for those who really want to indulge in Iceland, one of the trendiest destinations in Northern Europe, Around Iceland offers an incredible immersion in the land, the culture and the people. For more information contact your travel professional or Windstar Cruises.

Everett Potter is the editor-in-chief and publisher of Everett Potter’s Travel Report, a weekly news blog for smart travelers in search of value. He is also a travel columnist for USA Today and contributes to ForbesLife, Robb Report, and many other publications.