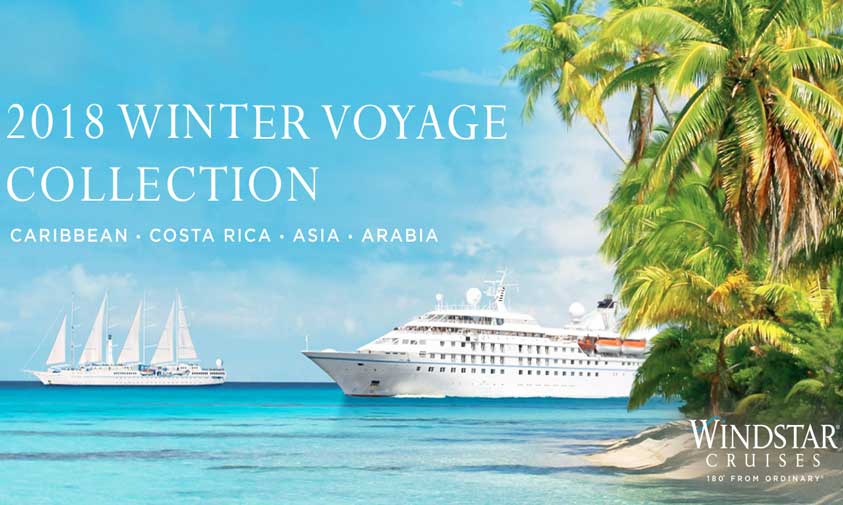 11 Windstar Experiences of a Lifetime

Windstar Cruises is more than a fleet of elegant, intimate yachts that call at some of the most beautiful ports in the world. It’s also a passport to adventure, a cruise line capable of delivering signature moments that are essentials on your bucket list. Indeed, Windstar curates life-changing experiences, thanks to ships with fewer than 300 guests that can provide journeys of discovery and cultural enrichment in places that mega ships simply can’t go.

Here are 11 iconic ones:

Windstar Cruises is sailing to Asia with the all-suite, 212-passenger luxury yacht Star Legend, bringing back the romance of the South China Sea with its Icons of Southeast Asia Cruise. The voyage from Hong Kong to Bangkok — you choose the direction — is a 14-day itinerary straight from a Joseph Conrad tale, with memorable overnight port stays in Vietnam’s Halong Bay, Da Nang and Ho Chi Minh City.

Windstar delivers extraordinary seats for the Grand Prix of Monaco, the world’s most famous auto race. The heart of the experience is two days of racing, with a Formula One® racing expert alongside as your guide, and a private cocktail reception and dinner in Monte Carlo. The glamour continues on this Riviera voyage that’s a private entrée to the glittering world of Cannes and Sanary-sur-Mer, France, and Portofino and Portoferraio, Italy.

A Private Yacht in the Caribbean

Dreaming of sailing in a private yacht through the remote and less-visited islands of the Caribbean? Windstar offers that magical voyage, on one of their sleek, intimate and highly maneuverable yachts that sail into hidden coves and small harbors that only private yachts can reach. They go to places that yachties love, like Jost Van Dyke, Soper’s Hole, and Virgin Gorda in the British Virgin Islands and tony St. Barts in the French West Indies.

Every seasoned cruiser recalls their monumental transit from the Mediterranean to the Red Sea through the Suez Canal. The new repositioning cruises that Windstar offers will make this a reality once again, with a daylight transit of the Suez Canal, which changed the world when it opened in 1869. Stopping at the ancient ruins of Petra, Jordan, and the pyramids at Luxor, Egypt, takes you further into the mysteries of the Middle East.

There’s no more dramatic way to see the land of fire and ice than from the deck of a private yacht. Windstar sails alongside Iceland’s volcanoes and the snow-covered peaks, past Surtsey Island, created when a volcano erupted in 1963 and regraded by geologists as the youngest place on earth. The adventures continue with a visit to Heimaey Island, “the Pompeii of the North,” and a polar flight to Grimsey Island, which straddles the Arctic Circle.

Cruise the Coast of Japan

Few travelers get to visit Japan by sea but Windstar will sail from Osaka to Yokohama over 10 days, giving you the chance to sit in your deck chair and gaze at Mount Fuji. It’s a remarkable and memorable way to explore the gardens and cities of Japan and to visit the Hiroshima Peace Memorial (a UNESCO World Heritage Site) and the sacred shrines of Shingu.

An Odyssey through the Greek Islands

Jewels of the Mediterranean, the Greek Islands are on everyone’s must-do list. Windstar delivers the most celebrated islands, such as Mykonos and Santorini, but with a yacht small enough to navigate small harbors that the big ships can only sail past. Windstar also docks at such magical islands as Patmos, Nafplio, and Monemvasia — providing a deeper entrée into Greek life and culture.

A Sail through Scandinavia

A Baltic cruise on Windstar is an extraordinary cultural sampler of seven diverse countries, ranging from an evening in Tivoli Gardens in Copenhagen, Denmark, to a stroll through the Medieval Old Town of Tallinn, Estonia, and a sea kayaking exploration among the islands of the Finnish archipelago. The highlights include two days in St. Petersburg, Russia, with a night at the famed ballet as the Destination Discovery Event and an exclusive morning visit to the Hermitage Museum one hour before it opens to the public.

If a cruise is about the ports of call, then a crossing is all about the journey, about having the time to read that blockbuster novel, begin a new fitness routine, savor spa treatments and reconnect with the natural world and yourself. An Atlantic crossing harkens back to the days of the great ocean liners that plied these waters, an experience of uninterrupted blue water bliss.

Sailing through the legendary “path between the seas” is a rite of passage for sailors and Windstar makes the daylight trip even more special with a Destination Discovery Event. On the 48-mile journey through this historic canal, there’s onboard narration describing both the history of the canal and its day-to-day working as well as festive music provided by onboard musicians, as you and the Windstar yacht are raised and lowered 85 feet through the three sets of locks.

Windstar’s sailing to Tahiti and the Tuamotu Islands is a chance to see the world that drew the painter Paul Gauguin to the storied South Seas. Thanks to the Watersports Platform on the yacht, it’s also an immersion in nature, from snorkeling in Rangiroa’s famous lagoon to exploring Fakarava, a UNESCO Biosphere Reserve, with some of the best undersea life in the South Pacific.

Windstar Cruises has an amazing roster of once-in-a-lifetime cruise experiences in 2017, kicking off with the Asia sailings on Star Legend. A signature voyage is Icons of Southeast Asia, which brings back the romance of the South China Sea on a trip from Hong Kong to Bangkok. On Tahiti & the Tuamotu Islands voyage, you have a chance to experience what are arguably the most beautiful tropical islands in the world. Around Iceland takes you alongside Iceland’s volcanoes and geysers while the Grand Prix of Monaco is your ticket to the world’s most famous auto race on a special Themed Cruise. For more information, contact your travel professional or Windstar Cruises.

Everett Potter is the editor-in-chief and publisher of Everett Potter’s Travel Report, a weekly news blog for smart travelers in search of value. He is also a travel columnist for USA Today and contributes to ForbesLife, Robb Report, and many other publications.