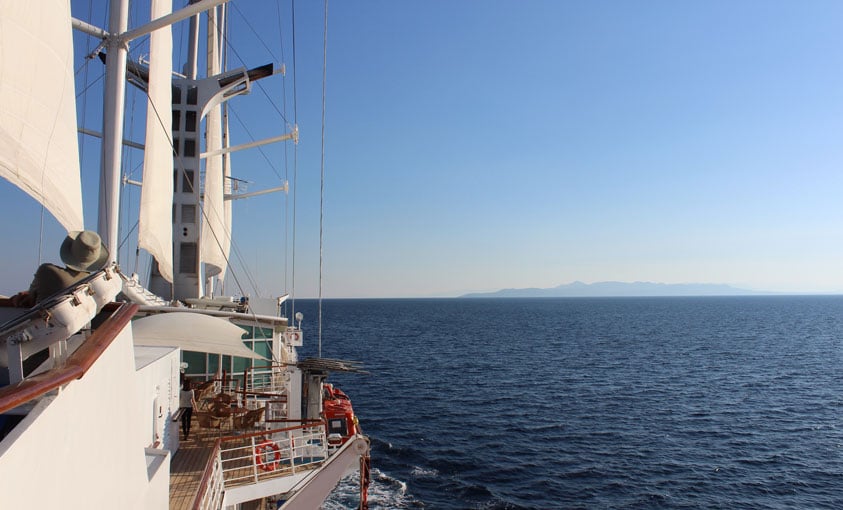 Everyone has a mental picture of the stereotypical sunburned and hard-drinking cruiser that frequents inexpensive mass-market ships; as well as the well heeled elderly type found on a luxury ocean cruise line. However, the spectrum of typical cruise ship passengers found on mega-ships is completely different from the spectrum of personalities found on a sailing cruise. People who crave the sailing yacht experience want something altogether different from a contained leisure experience on a floating city. They enjoy the small size of the ships, the sensation of rolling with the waves, the sense of timeless adventure stretching back centuries. And there are always certain characters on every cruise.

Read our guide to the five quintessential types you’ll meet on any Windstar Cruise…see if you recognize one or more.

If this person could get away with shimmying up to the very top of the mast like an old-school sailor and taking over the bosun’s chair, they would do it. They are endlessly fascinated by what’s on the horizon, and they want to find the very best spot on the ship to monitor it undisturbed. Occasionally they might take a photo, but mostly they’re content to just nestle up in the rigging and watch the sea.

With professional-quality camera ever at the ready, the photography enthusiasts onboard a Windstar cruise may not be paid professionals, but they probably could be if they wanted to quit their (much higher-paying) day jobs and go into freelance photography.  You’ll spot the serious ones right away. Just look for the people ignoring all the festivities of the first Sail Away party, and instead making their way from one place on the ship to the next, peering through their camera viewfinder in search of the best angles. Also, these people generally can be found grouped together in an animated little circle, endlessly debating the merits of Kodak vs. Nikon.

Maybe a few years ago we would snicker at a person earnestly pointing their iPad in one direction for 5 seconds, laser-focused and ignoring everything else in the world. Maybe we didn’t understand people shooting the same selfie 25 times and then doing a live-video version “for my Snapchat.” That was before commercials shot on iPhones began to air on primetime—and before your daughter’s friend quit her job to be an Instagram influencer. Now we know: These people are as serious about their snaps as the semi-pro camera enthusiasts are—the main difference being, they create their art with an iPhone 6.. And their work is not done until they’ve uploaded their favorite photos to social media, hashtagging #wanderlust #cruising #blessed.

With traditional cruises, if you can do a walking tour, you’re fitter than half the other travelers. With sailing cruises, being able to manage a semi-rigorous walk is required just to get on and off the ship and the pier.  And many fellow cruisers do not want to be walking when they could be climbing a thousand steps to a medieval lookout; or standup paddle boarding around a bay; or cycling a hilly jungle trail in the Caribbean. In fact, there are always a few Windstar cruisers who enthusiastically seek out the activities that are so physically demanding as to not be included on any excursion programs. Those are the challenges they like.

Words like “authentic,” “immersion” and “experiential” are bandied about a lot in travel, but most people don’t really expect to find any of those things on a cruise. Cruises excursions are supposed to be perfectly curated, well supervised adventures. Small ship cruises certainly break out of that mold by encouraging guests to explore independently in smaller ports. But certain  Windstar travelers want a curated experience that specifically provides authenticity.  If they’re going to do a market tour, they want to see the chef haggling with fishermen over the price of octopus. If they’re  eating street-style food, they don’t want it in a beautiful hotel setting—they want it from a street cart. Because not all cruisers crave this degree of authenticity, sometimes these intrepid seekers have to break off from the group—and that’s absolutely fine, as long as they’re intrepid enough to get back on the ship before it leaves port.

For additional information about private yacht-style cruising with Windstar, contact a travel professional or Windstar Cruises by phone at 877-958-7718, or visit www.windstarcruises.com. The author of this post, Lena Karz, cruised Greek Isles on MSY Wind Star. All images are provided by the author.