Windstar’s Windward Ways & Tobago Cays  cruise visits natural wonders and historical sites across the Caribbean Sea, but you’ll still have plenty of time to relax on the beaches of the ABC islands and beyond.

Discover Bonaire’s legendary diving, or if you’re not PADI certified, paddle a glass bottom kayak and then snorkel above a variety of 1,000-year-old corals in Tobago’s Angel Reef. The best time to use Windstar’s Watersports Platform is during the anchorage in the calm waters of Saline Bay in Mayreau, the smallest inhabited island of the Grenadines. Descend into a cave with a hidden waterfall in Barbados, or if you’re keen to explore the jungle, the Tobago Main Ridge Forest Reserve is a prime spot for hiking and birding. The Toraille Waterfall in St. Lucia has an idyllic swimming hole, and the views of the Piton Mountains are just as mesmerizing.

If you’re seeking more mellow activities, ride along the scenic Kaya Para Mira road to the town of Rincon, which was Bonaire’s first village and the oldest settlement in the Dutch Caribbean. Or, meander through the cobblestone streets and marvel at the colorful buildings in the Punda District of Curacao’s capital city of Willemstad, which is a UNESCO World Heritage Site.

Below are the highlights from the 7-day Caribbean cruise: 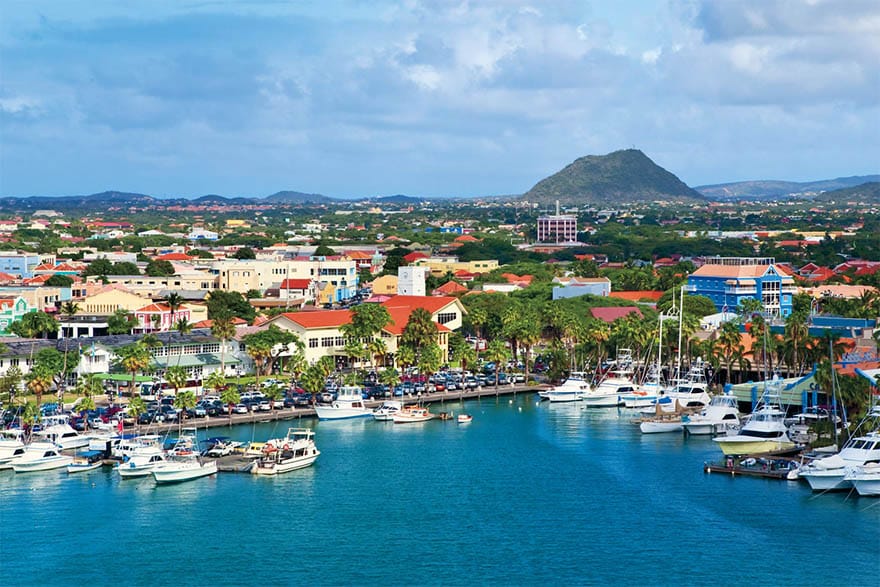 Depending on your departure date, your cruise will either begin or end in Aruba’s capital of Oranjestad. From the colorful buildings on Main Street to the shops and eateries at the Renaissance Marketplace, you can either walk or take an eco-friendly trolley to check out the bustling port city. The National Archaeological Museum has an impressive collection of indigenous artifacts, some of which date back to 2500 B.C., plus an exhibition of contemporary island artists.

The Ayo Rock Formations are located on the east side of the island, and the origin of the boulders is a bit of a mystery. It appears as though they have been strategically placed among the cacti, and you can climb to the top to admire the coastal landscape. The Arawak Indians, who came to the island from Venezuela around 2000 B.C., used the rocks as shelter from storms, and you can see some of their petroglyphs.

The 90-foot California Lighthouse is located on the northern tip of the island, and visitors will admire stunning 360-degree views from the top. The structure was named after the S.S. California, which sank right before the lighthouse was built in 1910. Dive deeper into island history with a trip to Bushiribana, the ruins of one of Aruba’s famous gold mines. Gold was discovered in Aruba in 1824, and during the subsequent Aruban gold rush, the island produced more than 3 million pounds of the precious ore. 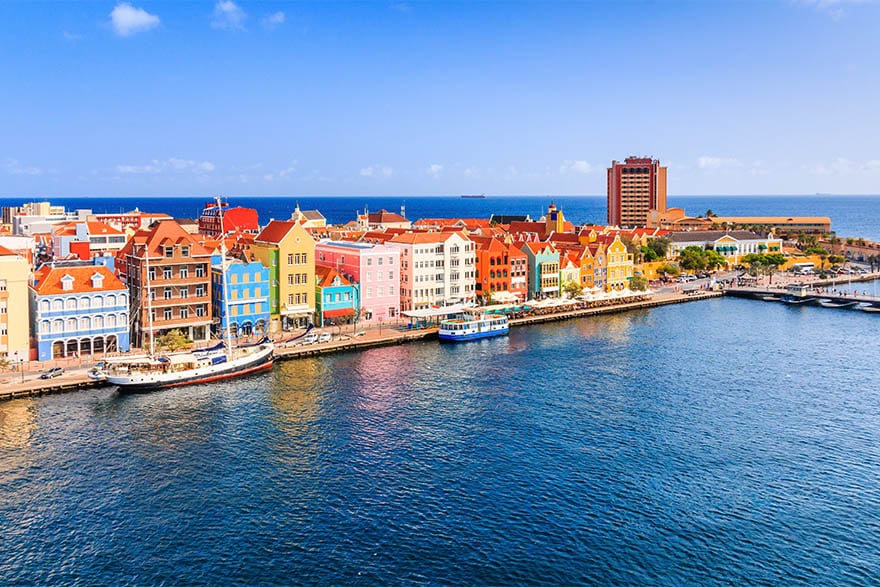 After the Dutch West India Company fought the Spanish for possession of Curaçao, Fort Amsterdam was built in 1634 on the eastern bank of Sint Anna Bay. The fort eventually developed into the city of Willemstad, and the Punda District is recognized as a UNESCO World Heritage Site. Punda’s cobblestone streets and colorful storefronts are only accessible to pedestrians, and the Penha building is one of the top stops for architecture enthusiasts. Originally constructed in 1708, the Penha building is often compared to a dollhouse, with its vibrant yellow exterior and gingerbread trim.

The Hato Caves are over 300,000 years old, formed from the accumulation of marine coral limestone over millions of years. After sea levels dropped during the Ice Age, these unique formations were exposed to atmospheric corrosion and karst processes. A guided tour takes you along well-maintained trails and into different chambers with stalagmites and stalactites, natural pools and even a waterfall.

Eager for an off-road excursion? Jump in a 4×4 Land Cruiser and visit some of the most remote spots on the island, including Driftwood Bay. From cacti to divi-divi trees, the diverse landscape will surprise you, and you may spot warawara birds, flamingos, lizards and even wild pigs. 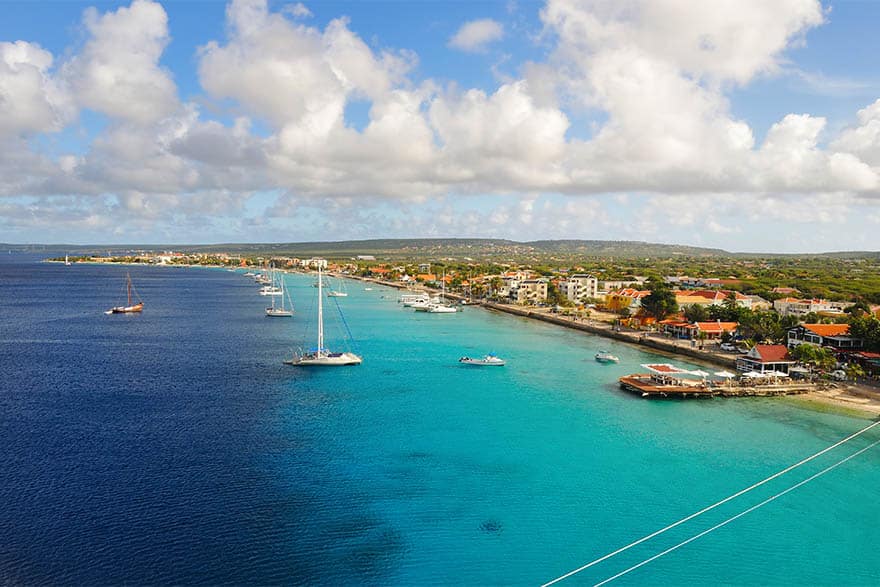 With more than 400 fish species and 50 types of coral, it’s easy to see why Bonaire is rated the number one dive destination in the Caribbean. Experienced divers will marvel at the pristine reefs and marine life, but if you’re not PADI certified, there are plenty of other ways to explore the crystal clear waters of Bonaire National Marine Park. Jump in a glass bottom kayak, snorkel, or even relax and ride in a 32-foot glass bottom boat while you search for fish like blue tangs and wrasses, and both hawksbill and green sea turtles.

Looking for flamingos? Goto Lake, or Gotomeer, is a land-locked saltwater lagoon on the north side of the island that regularly attracts flocks of Bonaire’s national bird. Flamingos have also been known to hang out at the Pekelmeer Sanctuary, near the salt ponds on the southern tip of the island. Set between rows of harvested salt pyramids, the pink salt ponds get their color from a microorganism called halophilic bacteria, and they make for a unique photo op. Lac Bay National Park is another popular spot for wildlife watchers, with impressive mangrove forests, barrier reefs and unspoiled beaches.

The charming and colorful town of Rincon, which was settled by the Spanish in 1527, was Bonaire’s first village and the oldest settlement in the Dutch Caribbean. Located on the north end of the island, the area has several stunning vistas, especially if you drive along the Kaya Para Mira Road. An equally impressive assortment of colorful buildings can be found in the capital city of Kralendijk, including the lighthouse at Fort Oranje. The current lighthouse, which is painted a vibrant shade of orange, was built in 1932, but the original fort dates back to 1639, and it is the oldest structure on the island. 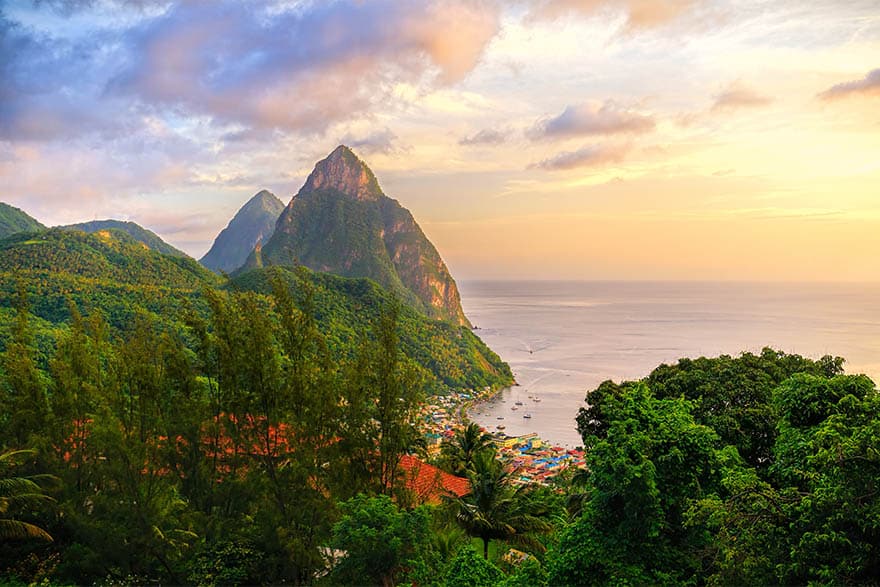 Whether it’s hiking trails in the Piton Mountains or enjoying a farm-to-table lunch, St. Lucia caters to more adventurous travelers. The charming town of Soufriere is regarded as the heart and soul of the island, and the nearby Sulphur Springs offers visitors the opportunity to take a dip in the natural mud baths.

Located next to Soufriere, the Pitons are a spectacular pair of volcanic mountains covered in lush vegetation. (If you’ve received a postcard from a friend visiting St. Lucia, there’s a good chance it was a photo of these UNESCO-recognized natural wonders.) The Gros Piton Nature Trail ascends 1,800 feet, and once on the summit of the volcanic plug, hikers are rewarded with incredible views of Petit Piton, the more dramatic of the two peaks.

If you’re more interested in chasing waterfalls (and going for a swim), check out the Toraille Waterfall, which is right by the road, or head to the Edmund Forest Reserve and make the 2-mile trek to the Enbas Saut Waterfall. Another option is Grand Eden Estate, which has a handful of natural trails — and a view of Mount Gimmie, the tallest peak on the island.

Mayreau (Saint Vincent and the Grenadines) 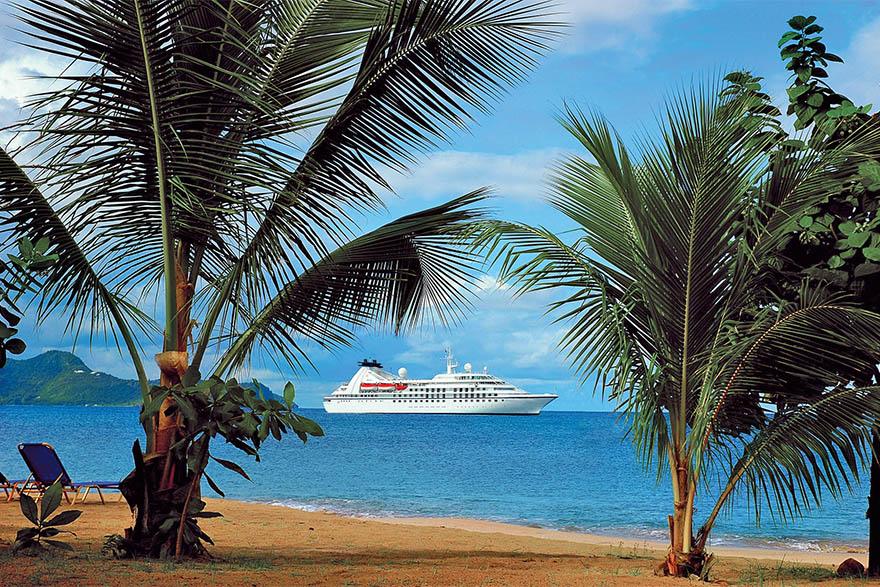 Mayreau has fewer than 300 residents, and at just half of a square mile, it’s the smallest inhabited island of the Grenadines. This is the perfect time to grab a stand-up paddle board from the Watersports Platform and explore the calm waters of Saline Bay, which is where Windstar anchors for the day. The island only has one road, but there are a handful of charming cafes, including Dennis’ Hideaway, which is up the hill from the dock at Saline Beach.

Or, if you’re interested in seeing part of the Grenadines archipelago, head to Mopion Island, which is often referred to as the smallest island in the Caribbean. The tiny sandbar is surrounded by a reef lagoon, and home to a lone thatched umbrella. While it’s an amazing photo op, the umbrella was placed on the islet so sailors could spot it from a distance, thus avoiding crashes on the reef. 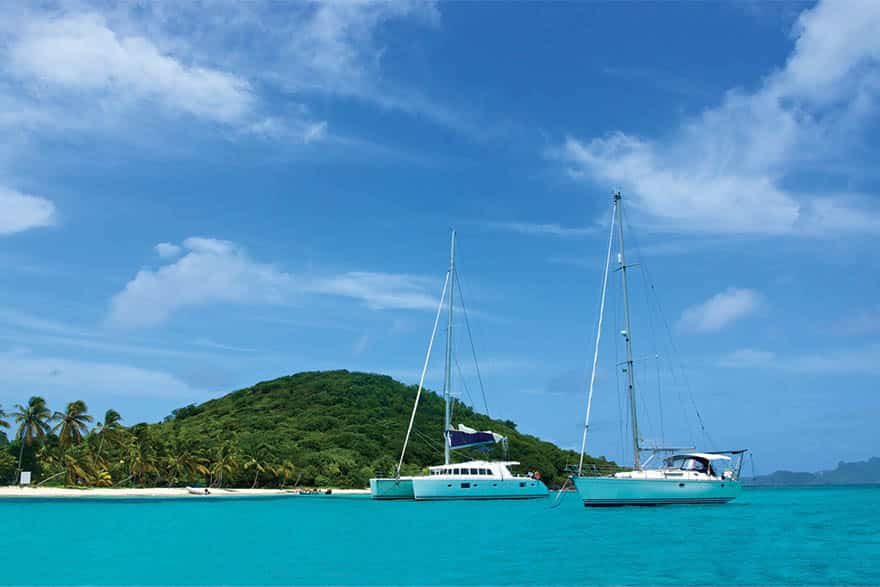 Located on the north side of Tobago, the aqua waters of Man-O-War Bay are surrounded by golden sand and palm trees. The adjacent Pirate’s Bay is a great spot for snorkeling, and the Watersports Platform is available to guests during the anchorage at Man-O-War Bay.

Of course, the prime location for undersea exploration is Angel Reef, which boasts visibility up to 100 feet. Explore Angel Reef via a glass bottom boat, or snorkel above the 1,000-year-old coral formations, which include star, starlet, honeycomb and plate corals dotted with sea plumes. With the abundance of healthy coral comes marine life, and you will likely see sea sponges, plus all kinds of colorful fish, including angelfish, groupers, snappers and parrotfish.

The Tobago Main Ridge Forest Reserve, which is recognized by UNESCO as the oldest nature reserve in the western hemisphere, is a paradise for birders and hikers. You might be lucky enough to see a white-tailed sabrewing hummingbird, or perhaps even a blue-backed manakin as you wander through the tropical vegetation. Argyle Falls is a 3-tiered waterfall with a natural pool open to swimmers, and the Gilpin Trace Trail runs through the heart of the 9,780-acre reserve. 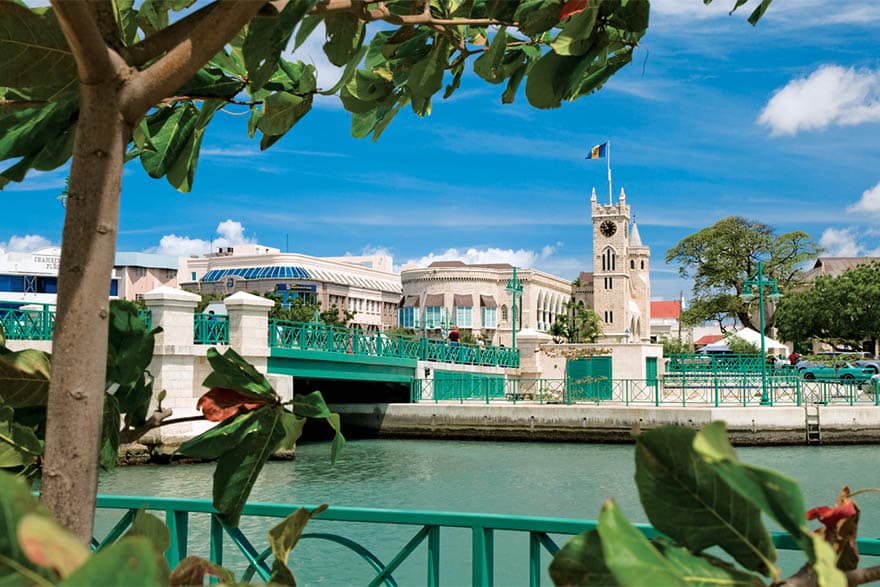 Bridgetown and its Garrison District offer a unique mix of British, African and American  culture, and the capital city of Barbados was awarded UNESCO World Heritage Site status in 2011. Take a leisurely stroll across the Chamberlain Bridge, which overlooks the Careenage (aka Constitution River) at Carlisle Bay. Carlisle Bay is known for having some of the most beautiful beaches on the island, including Pebble Beach, Browne’s Beach and Bayshore Beach.

Bathsheba Beach is located on the Atlantic side of the island, and the surf spot is dotted with massive rock formations, which are actually the remains of ancient coral reefs. Just down the road from Bathsheba is Harrison’s Cave, which features stalagmites and stalactites, plus streams, pools and a waterfall. If you’d rather stay above ground to immerse yourself in nature, Barbados is also home to a number of fabulous gardens, including Hunte’s Gardens, Andromeda Botanic Gardens and the Flower Forest.

The Sunbury House, which dates back to 1650, is considered one of the island’s top historical sites. The former plantation house is tucked among picturesque palm trees, and the cellar houses a large collection of antique carriages. The Gothic-inspired St. John’s Church is another exquisitely beautiful landmark, famous for its ornate interior, and for housing the tomb of Ferdinand Paleologus, a descendant of the Byzantine Imperial family.