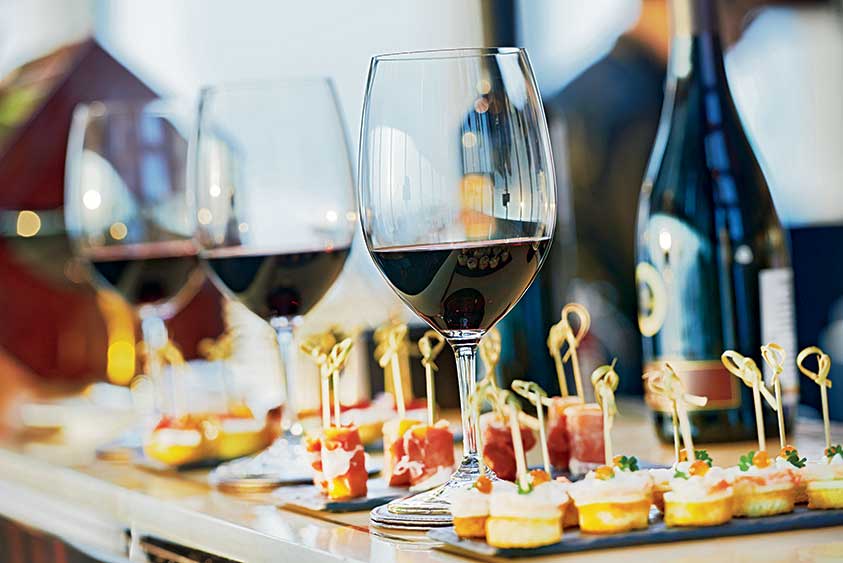 This week we’re very excited to launch our first-ever James Beard Foundation Culinary Collection cruise, sailing aboard the Wind Surf on an eight-day voyage from Lisbon to Barcelona, docking in Tangier, Morocco before heading to Spain with stops in Málaga, Almeria, Cartagena, Ibiza, and Tarragona.

This new partnership between the esteemed two more cruises in the Collection in 2016 and a few cabins left to book).

You may have read about the amazing chefs we have on board as part of the Culinary Collection, but no less important than our need to savor is our need to sip. So we are equally excited to have guest sommeliers take the stage on these special cruises, offering wine tastings on board, cocktail classes, and wine pairing dinners, as well as serving as a general wine guide to the region for guests to “tap into” along the journey.

Sommelier Steve Olsen, AKA “The Wine Geek,” is cruising aboard Wind Surf right now on the special voyage. He teaches, lectures, and writes all over the world about wine, beer, sake, and virtually any other beverage, with a primary goal of making tasting fun. Steve has been acting as a wine consultant to the Spanish government for over 25 years, so he’s a fantastic resource on a cruise that spends so much time sailing in Spain. No doubt, Steve will impart his vast knowledge of wines and the wine industry along with sharing wine selection and pairing tips during several wine tastings, pairing wines with guests’ meals at dinner, and creating a special craft cocktail custom-made for the journey. Olsen joins Chef Michel Nischan: founder and CEO of Wholesome Wave and a three-time James Beard Foundation Award winner.

On June 10 aboard the James Beard Foundation Culinary Cruise of Spain & France (a 10-day voyage on Star Legend sailing from Lisbon to Dublin, stopping in St.-Malo, La Rochelle, and Bordeaux in France; Gijon and El Ferrol in Spain; and Porto in Portugal), the guest sommelier is no less impressive: William Davis. William has spent the last 15 years traveling to wine regions in France, Italy, Spain, and Germany and currently works with one of the leading importers and marketers of wines and spirits in the United States. William is no slouch when it comes to tasting wine: he has passed the certified and advanced sommelier exams and is working to achieve his master sommelier title with the Court of Master Sommeliers. He is a member of the Guild of Sommeliers and was the two-time regional champion of Top SOMM, a competition to find the best sommelier in the U. S., and a finalist at the national competition in San Francisco. Expect some blind tasting tips from William! He joins Chef Maria Hines: owner and executive chef of Seattle’s Tilth, Agrodolce, and the Golden Beetle and winner of the 2009 James Beard Foundation Award: Best Chef Northwest.

Last but certainly not least is Sommelier Kelly Wooldridge, who is joining the second round of the James Beard Foundation Culinary Cruise of Spain & France, this time on the reverse itinerary aboard Star Legend on August 9.  Kelly is the wine director of the popular Bonnano Concepts restaurant group in Colorado and is a young talent in the wine world, having earned accolades from Zagat’s “30 Under 30” list, as well as becoming a national finalist in the Chaîne des Rôtisseurs Young Sommelier competition in 2014 and 2015 for the most talented sommelier under 30 in the world. Kelly is an advanced sommelier and currently is studying for the master sommelier diploma examination. Before his wine career began, he worked as a cook under award-winning chefs including Food & Wine Best New Chef Bryan Moscatello, making him even more attune to the pleasures of food and wine pairings. Lucky Kelly. Kelly joins Chefs Matt & Kate Jennings: owners and chefs of Townsman in Boston and four-time James Beard Foundation Award nominees for Best Chef: Northeast.

We strive to immerse our guests in the local culture and cuisine of the destinations we travel to throughout their time on board and ashore, creating a more intimate connection to the world. We hope our wine guides help guests feel this connection even more deeply – or at least offer a more pleasurable palate experience while sailing through some of the most sumptuous and picturesque regions of the world.