Exploring the Ancient Civilizations of the Red Sea and the Persian Gulf: Wonders of Arabia

Windstar’s Wonders of Arabia cruise is a step back through the ancient civilizations of Greece, Egypt, Jordan, and Oman, bringing guests to parts of the world—and the world’s history—that few have the opportunity to experience.

This exceptional voyage starts in ancient Greece, the cradle of Western civilization, and after passing through the Suez Canal, take in the spectacular rose-colored city cliffs of Petra. From there, enjoy the magnificence of ancient Egypt’s temples and tombs, and visit the Omani fjords and homes of sultans, before ending the exotic journey in Dubai, the modern crown jewel of the Emirates. You will also have plenty of sea days in between ports to enjoy all the amenities that Windstar’s Star Legend has to offer. 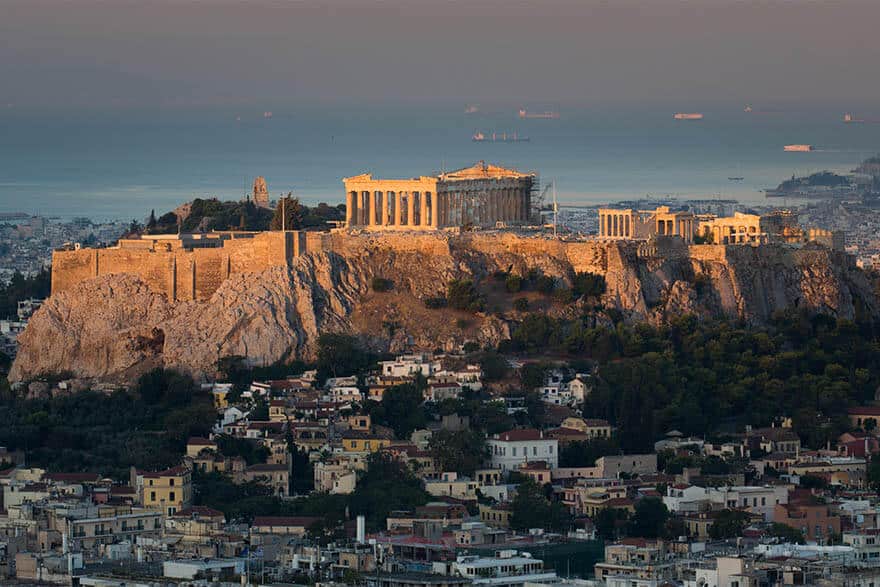 Often considered the cradle of Western civilization and the birthplace of democracy, Athens is one of the world’s oldest cities—dating back 3,400 years—and the capital of Greece. With that past comes a tremendous amount of history to see and experience, from bucket list attractions to world-renowned museums and world-class shopping.

Arrive early to take in the historical sites. The Acropolis features the remains of its many historical and architectural wonders, including the Parthenon, the statues of the caryatids of the Erechtheion, the Odeon of Herodes Atticus theater, and the Temple of Athena Nike. Be sure to visit the contemporary Acropolis Museum to see one of Athen’s most valuable collections of ancient Greek art while you are there.

Other must-see sites include the Temple of Poseidon and the cable car up to Lycabettus Hill, plus the charming squares and bustling cafés of The Plaka. 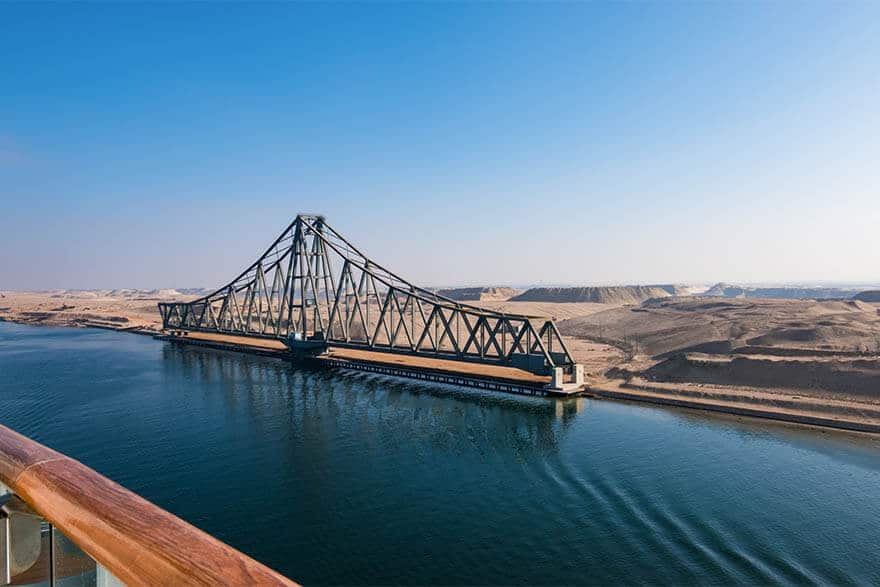 Spend the day relaxing in any of Windstar’s public spaces, like the Yacht Club, the Star Bar, or the pool deck—or simply in the comfort of your suite balcony—as you transit this 120-mile miracle connecting the Mediterranean Sea to the Red Sea. With Asia on one side and Africa on the other, the day-long transit features two bridges, a massive power line crossing, and the town of Ismailia, Egypt, with its minareted mosque. You’ll have plenty of time to enjoy the spa, fitness center, entertainment, library, and delicious meals aboard your floating resort. 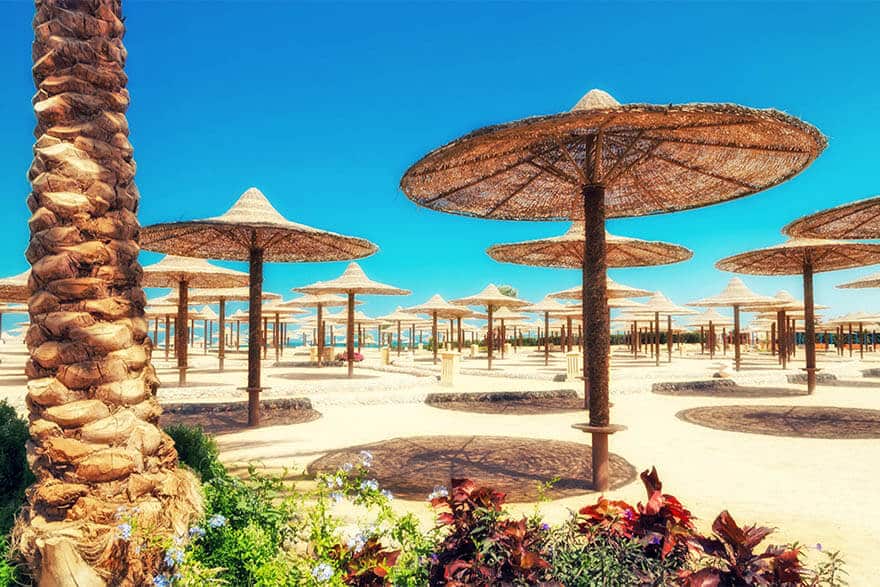 A classic Red Sea resort town along Egypt’s coastline, Hurghada is known for its underwater world, with spectacular snorkeling and scuba diving, along with a bevy of watersports, including windsurfing, kitesurfing and boating. There are also many lovely public beaches for sunbathing and swimming.

For something a bit more exotic, the nearby desert features 4×4 safari outings with plenty of indigenous flora and fauna, as well as visits to Bedouin communities to experience their traditions, cultures, and camel rides.

You can also live like the local Egyptians with a visit to one of Hurghada’s commercial districts. Dahar is considered the Old Town area, with several mosques and a traditional bazaar. Sakala is Hurghada’s city center and features modern restaurants and shops, as does El Mamsha, a 2.5-mile pedestrian street with many of the city’s newest hotels, restaurants and shops. 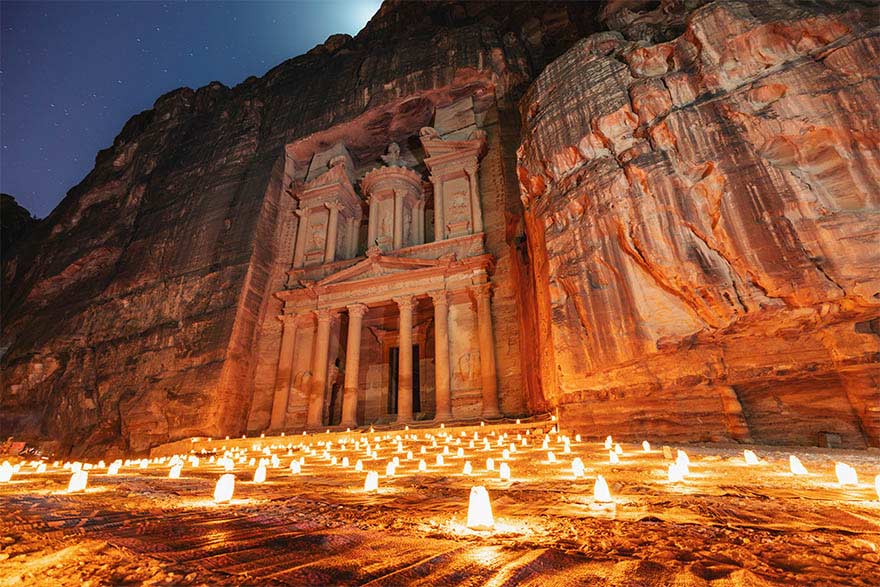 Aqaba is Jordan’s only coastal city, featuring seaside resorts, white sand beaches, and robust coral reefs, making it one of the best scuba diving spots in the world. But Aqaba is perhaps best known as the gateway to Petra.

Located two hours to the north, Petra is recognized as one of the most famous archaeological sites in the world. Inhabited by the Nabataeans as early as 7,000 BC, Petra became a major incense trading route for frankincense, myrrh, and spices.

The Nabataeans were skilled stone carvers who built Petra right into the side of the red sandstone cliffs, hence the nickname, “The Rose City.” Today, visitors arrive at Petra through the Siq, a narrow gorge that winds its way for three-quarters of a mile before arriving at The Treasury. Other sites not to be missed within the remnants of this ancient city are the Monastery, The High Place of Sacrifice, and the Royal Tombs. 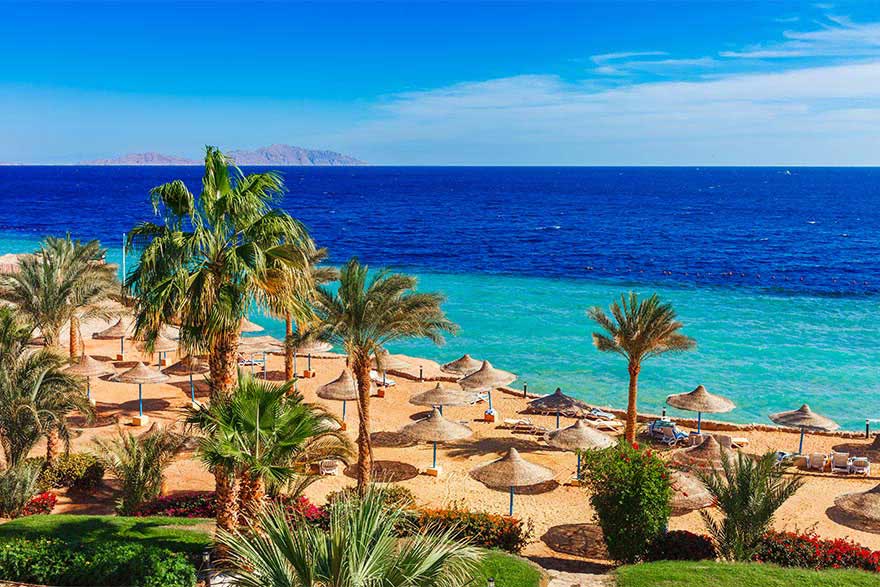 On the southern tip of the Sinai Peninsula along the Red Sea, Sharm El Sheikh’s sandy beaches, calm crystal-blue water, and spectacular coral reefs make it one of the best snorkeling and diving spots in the world. Ras Mohammad National Park, which is predominantly underwater, is home to more than 220 species of coral.

Another unique attraction is the journey up the winding roads of Mount Sinai to St. Catherine’s Monastery. This Greek Orthodox monastery is located on the spot where God is said to have appeared to Moses in the form of a burning bush, and it is the oldest continuously inhabited Christian monastery in the world.

For city folk, popular sites include the Al Mustafa Mosque, which is the biggest mosque in the city and the Coptic Orthodox Church, considered one of the ten most beautiful churches in the world. Be sure to stop by Old Market, which has plenty of shops selling jewelry, pottery, Bedouin slippers and leather, as well as cafés offering local fare. 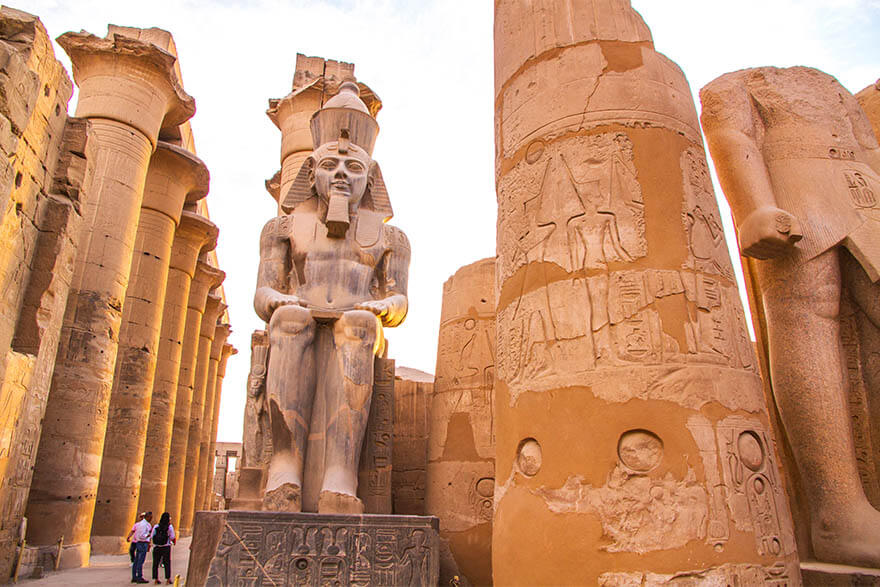 A port city along Egypt’s Red Sea, Safaga serves as the gateway to Luxor, a modern Egyptian city and the site of the ancient city of Thebes.  Considered one of the world’s greatest open-air museums, Luxor covers more than 160 square miles and features some of the world’s most majestic temples, ruins, and artifacts. Fortunately, Windstar offers a two-day excursion to this land of the pharaohs.

For a crash course in Egyptian history, start your adventure at the Luxor Museum. Then head to the Temple of Luxor and Temple of Karnak (considered to be the largest sanctuary in the world, which took 2,000 years to build), all on the eastern side of the Nile. Take a traditional felucca across the Nile to the West Bank to explore the stunning architecture and landscape of Hatshepsut Temple, the honeycomb of tombs at the Valley of the Kings—including King Tutankhamun, and the tomb of Queen Nefertari and other notable queens and princesses at the Valley of the Queens. 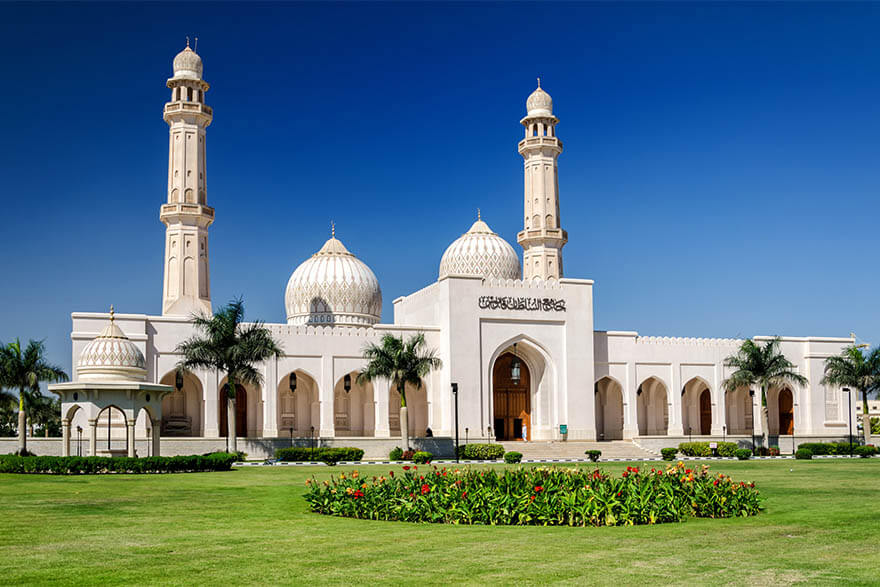 After five relaxing days at sea aboard your Windstar floating resort, arrive in “The Garden City” of Salalah.

History buffs and avid archaeologists will marvel at the ruins of the Queen of Sheba Palace, along with Al Baleed, the ancient trading center of frankincense and a UNESCO World Heritage Site. Head to the Bay of Khor Rori and Sumhuram, the citadel of an ancient city and the epicenter of Salalah’s once-flourishing incense trade, and stop by Al Husn Souq for souvenirs of frankincense, myrrh, incense, perfumes, and oils. Wander inside the massive Sultan Qaboos Grand Mosque or drive the grounds of the magnificent Al Hosn Palace, the personal residence of His Majesty, the Sultan of Oman.

Mughsail Beach is another top attraction, with two miles of unspoiled beaches and cliffs, along with spectacular blowholes. These sea geysers shoot water out of the rock openings, reaching heights of nearly 50 feet. 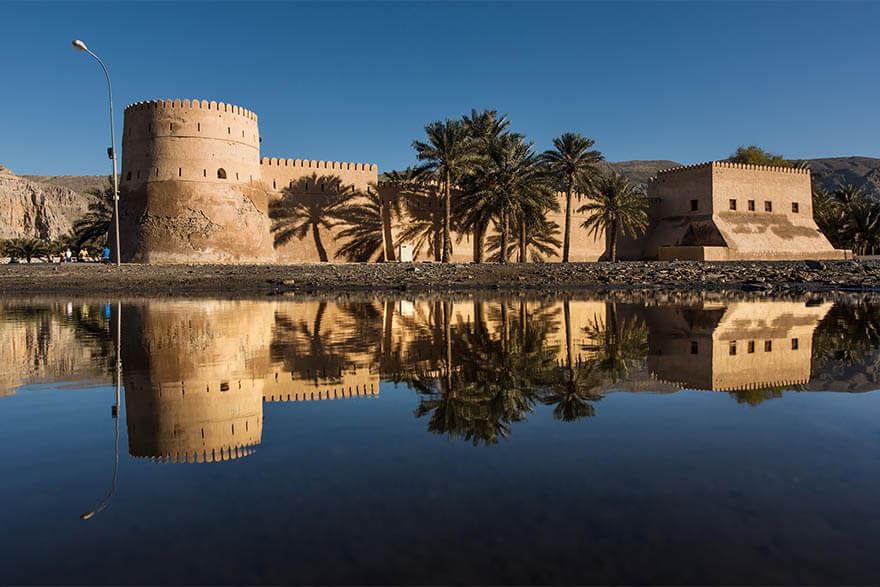 Located on the tip of the Musandam Peninsula, Khasab is often considered the Norway of Arabia, thanks to its white limestone cliffs and spectacular fjords. Get up close and personal with the narrow channels and lush scenery by cruising on a traditional Omani dhow, a one or two-lateen masted sailing vessel. You may even encounter dolphins.

Experience the history of Khasab through the stone turrets and towers at the 17th century Khasab Fort, or enjoy the stunning views with a trip up to Jebel Harim. At 6,260 feet, this is the highest peak of the Musandam Peninsula, and after taking in views of terraced mountain villages and lush forests on the way up, you’ll be rewarded with panoramic vistas from the summit. 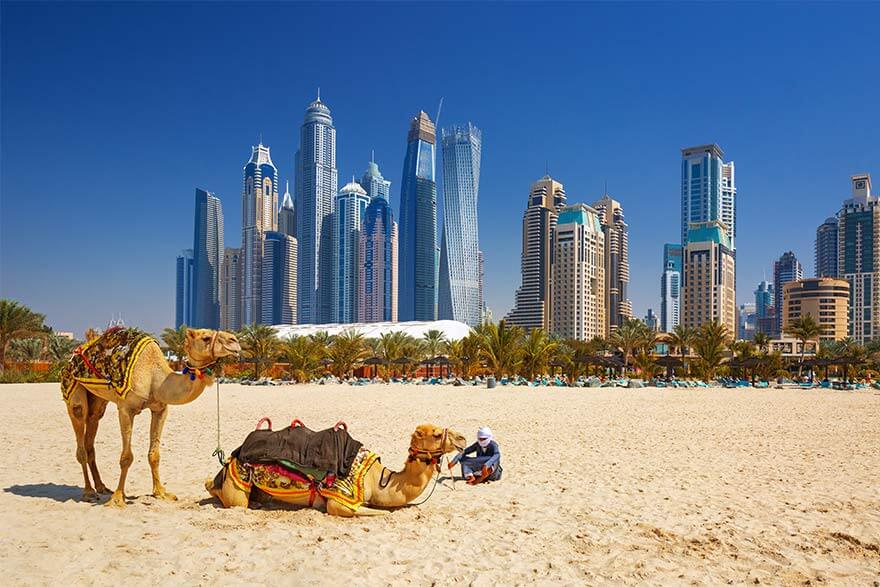 Plan to stay for an extra day or two in this exciting capital city, the most populous of the seven emirates that make up the United Arab Emirates. With towering modern skyscrapers, ultra-luxe shopping, and rich Arab culture, there is plenty to see and do before heading home.

Don’t miss the observation tower at Burj Khalifa, the world’s tallest building, for amazing views of the city and beyond. You can pick up your final souvenirs with a visit to Dubai Mall, the second largest mall in the world with more than 1,300 stores, or check out the jewelry at the Gold Souk. Explore the art galleries, cafés, and tea houses of Bastakiya Quarter, the city’s historic district, and take in the smells and colors at the Spice Souk, which is one of the most popular traditional markets in Dubai.