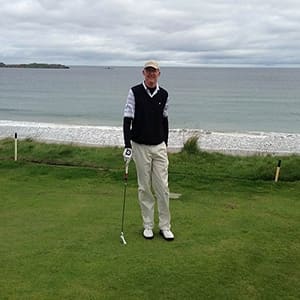 Windstar Cruises Hits a Hole in One with Golf Cruise

Windstar Cruises recently completed its first ever golf cruise, a 10-day pilgrimage of greens throughout Scotland and Ireland. Legendary Links, on Wind Surf’s Gaelic Explorer’s itinerary, was part of Windstar’s Signature Sailings, a collection of themed cruises. Everyone at Windstar was highly anticipating this voyage, including our CEO Hans Birkholz who was going on this golf cruise for his vacation!

When we started developing this package over a year ago, I wanted to find a balance between well-known courses with amazing histories and lesser known hidden gems in the area that would bring our guests up close and personal with their surroundings.  It was also essential to make sure we had courses that would please any type of player from the novice to the more experienced.  The experience was to be led by Golf Pro Bruce Murray.

The first course of the program was the Jubilee at St. Andrews. Arriving early, the fog was so dense we couldn’t see more than 10 feet in front of the tee.  Thankfully we had seasoned caddies on hand to direct the shots on the slim strip of land between the New Course and the sea, allowing our guests to enjoy the magical atmosphere without affecting their handicap.  The fog cleared and the sunshine broke through around the 4th hole allowing us to enjoy the rest of the course without too many balls lost.

We followed up the famous St. Andrews green with a lesser-known course at Cruden Bay.   Frequented by locals, you don’t normally find tourists playing here. Perched in the backdrop are the ruins of a 16th century castle, rumored to be the inspiration behind Bram Stoker’s, Dracula.   The course has an incredible history, rich with tales of castles, wars, and even Dolly Parton!  The course was breathtaking, and guests came off it sweating from the trek, but with wide smiles on their faces.

The next few days were spent playing at the prestigious Royal Dornoch and the Royal Portrush Club. With unmatchable courses, golfers make their way from all over the world to play at these championship greens.  Thankfully both days were cool and beautiful with views of white sandy beaches and massive sand hills. There was some wind, but our Windstar players enjoyed the challenge.

Waiting at the first tee at the Royal Dornoch Championship Course

After finishing up on the greens, guests enjoyed sunny weather for Windstar’s famous Deck Barbecue while sailing through the Irish Sea.

Our Destination Manager, Rob and me enjoying the Deck Barbecue

Days six and seven of the Legendary Links package gave our golfers some ‘free time,’ which allowed them to take tours with their partners who weren’t golfing, and also have some overall time to relax and enjoy the beautiful Wind Surf.

We ended our golfing trek at Castletown Golf Course located on the small and charming Isle of Man.  It was the perfect setting to end the trip on, surrounded on three sides by the Irish Sea and ancient ruins in the backdrop.  The historic course was laid out by golfing legend Mackenzie Ross in the 20’s and 30’s, boasting some of the purest links of golf in all of the British Isles.

Group photo of our golfing group at the Castletown Golf Club

The voyage concluded with a Farewell Dinner which included our Golf Pro Bruce Murray handing out small awards for each course.  It was the perfect way to end our golfing pilgrimage.

Windstar will be adding a few more golf sailings in 2014 in both Northern Europe and Spain, so keep your eyes out for new and exciting golfing adventures to come!

Where in the world is your favorite golf course?

Isle of Man Golf tours loved to see Windstar visit the Isle of Man. Great fun was had we look forward to welcoming you again on our courses.