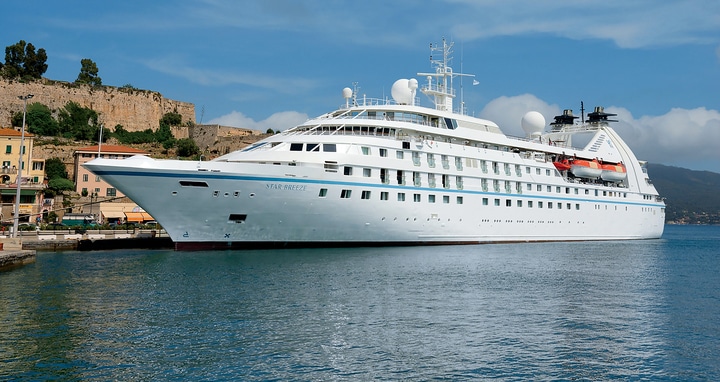 Windstar Cruises is pleased to announce the appointment of travel influencer Wendy Perrin as Godmother of the fleet’s newest yacht, the Star Breeze.

The company is adding two yachts to its fleet in May of 2015, including the 212-passenger Star Breeze and Star Legend. The addition of these two ships make the company the market leader in small ship cruising with 300 or fewer passengers, with a total of 1,242 berths. Star Breeze will set sail from Nice to Rome, May 6-10, 2015, with stops in Monte Carlo, Portofino, and Portoferraio.

Wendy Perrin is the founder of WendyPerrin.com, a groundbreaking site focused on travel solutions and travel planning. Prior to founding WendyPerrin.com, Perrin spent two decades at Condé Nast Traveler as its Director of Consumer News and Digital Community. During her time at Condé Nast Traveler, Perrin amassed a wealth of travel knowledge and recommendations, thus positioning herself as one of the travel industry’s most influential women. In addition to creating her travel website, Perrin is currently serving as TripAdvisor’s first-ever Travel Advocate.

“I am so pleased to sail on the inaugural voyage of Star Breeze as Godmother,” says Perrin. “I can’t wait to experience the yacht, as well as those charming harbors that only small ships can sail into, and I look forward to exploring even more of the world’s hidden-gem places aboard the Star Breeze in future.”
Perrin has sailed on Windstar twice as a guest lecturer, including on her honeymoon. She fell in love with the company’s devotion to bringing guests closer to the world through small ship cruising, coupled with the personalized service for which Windstar is known.

Perrin’s Godmother duties include hosting the Star Breeze Christening Ceremony on May 6, which involves a pier-side celebration and ceremonial champagne bottle breaking across the yacht’s bow. In addition to the ceremony and interacting with guests, Perrin will participate in the onboard press conference and attend the Lifestyles of the Glitterati Private Event in Monaco.

“We are thrilled to name Wendy Perrin Godmother of the Star Breeze,” says Hans Birkholz, CEO of Windstar Cruises. “She is one of the most respected and influential women in the travel industry, and has made it her life’s work to provide accurate and inspiring travel experiences to her readers. At Windstar, we strive to deliver a vacation experience 180 degrees from ordinary. We are proud to have a Godmother whose career of telling stories about the most magical moments in travel matches our philosophy.”

Perrin’s appointment to Godmother of the Star Breeze comes after an $8.5 million, three-week renovation in Genoa, Italy. Windstar receives delivery of the ship on April 15, 2015, and re-launches Star Breeze on May 6, 2015, after a full stem to stern transformation, including overhauls of the public spaces, dining venues, and suites.

About Wendy Perrin
Wendy Perrin is the founder of WendyPerrin.com, where she shares her encyclopedic knowledge of travel solutions and travel planners. As TripAdvisor’s first-ever Travel Advocate, Wendy advises its 315 million monthly visitors – the world’s largest travel community.
Wendy was formerly Director of Consumer News and Digital Community at Condé Nast Traveler, where she wrote her practical advice column, The Perrin Report, for 17 years. She started out long ago as the magazine’s Ombudsman (consumer advocate), investigating reader complaints about travel companies and helping wronged travelers get compensation, and that led to her book Wendy Perrin’s Secrets Every Smart Traveler Should Know.
Wendy has been a keynote speaker at conferences worldwide, on cruise ships, at Harvard University, and at the United Nations. Television appearances include The Today Show, Good Morning America, and many programs on CNN. She has won the Travel Journalist of the Year award, earned a Lowell Thomas award for investigative journalism, and been a finalist for a National Magazine Award—the magazine industry’s most prestigious editorial honor. She graduated cum laude from Harvard, where she majored in History and Literature.
Follow her on Facebook and @wendyperrin for all her best tips.