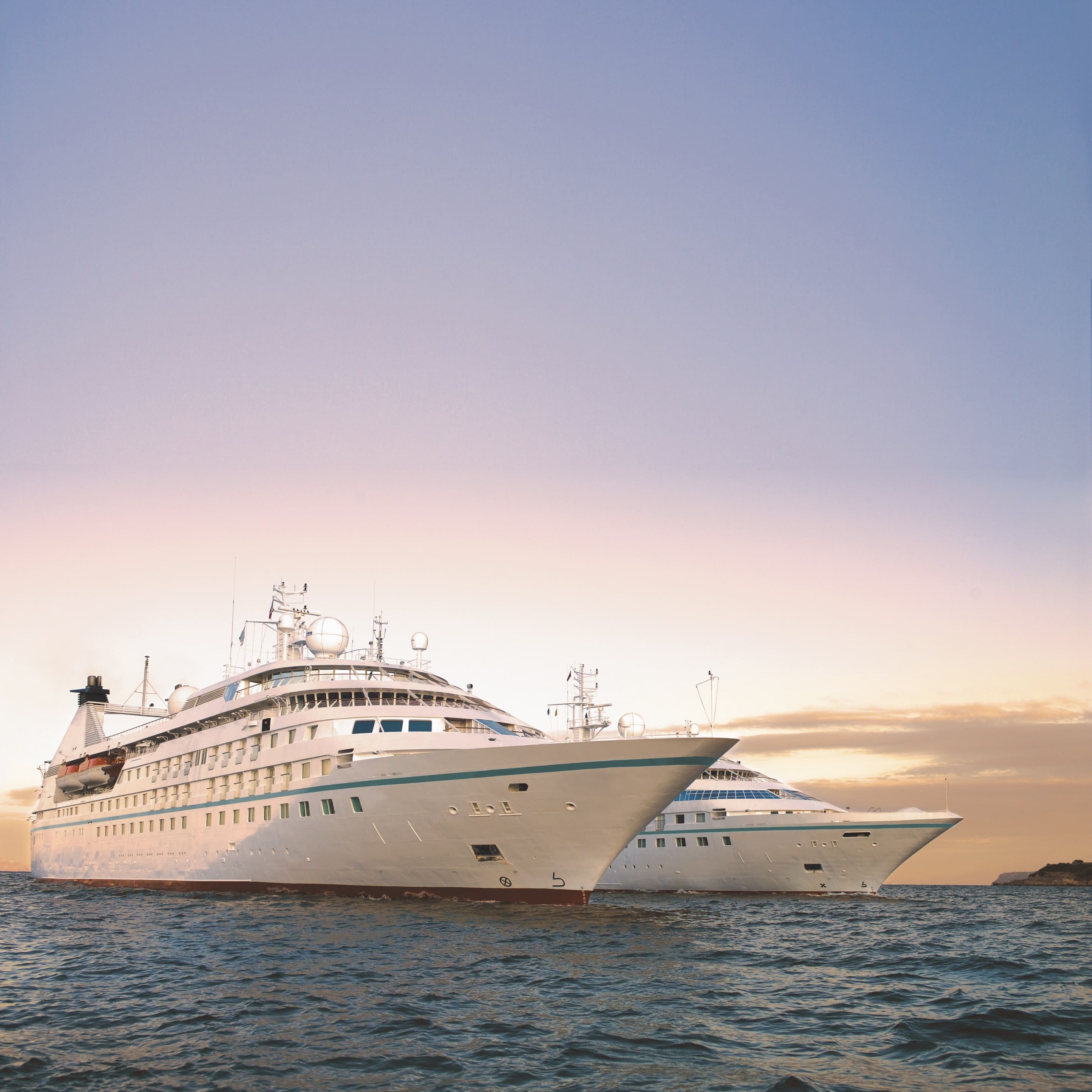 Today Windstar unveiled plans for the new Star Class – a collection of three all-suite power yachts that will join the fleet over the next two years beginning with the Star Pride in May of 2014.

“With only a maximum 212 guests on board ,these new Star Class yachts are the perfect fit for Windstar’s style of small ship cruising,” said Hans Birkholz, chief executive officer of Windstar Cruises. “All three yachts in the new yachts will receive significant style changes and stem-to-stern upgrades to align with Windstar’s yacht style cruising.”

Star Pride will debut this year with its inaugural voyage and christening ceremony on May 5, 2014, in Barcelona, Spain, following a three week transformation period.

“Star Pride is the first of the new Star Class fleet, and we can’t wait to introduce a new era of Windstar Cruises,” said Birkholz. “We are honored to have Mrs. Anschutz serve in the prestigious role of Godmother. It’s fitting to have her christen Windstar’s first yacht in 16 years as the Anschutz family has been an integral part of Windstar’s transformation the last few years.”

The three Star Class yachts are identical, with a guest capacity of 212 in 106 suites. At 10,000 gross tons, each yacht is 440 feet long with a breadth of 63 feet and six passenger decks. Delivery of Star Breeze is scheduled for April 15, 2015, followed by Star Legend on May 4, 2015 in Genoa, Italy. Both yachts will undergo a major transformation to public spaces, suites, and dining venues to fit Windstar’s style of small ship cruising. Our signature experiences, including our famous deck barbecue gala, the open Bridge experience, and the celebrated sail-away party will be showcased on board.

The Star Class will also debut our new Destination Suites, that will eventually be rolled out fleetwide. Owner Suites will be modeled after a signature Windstar destination, highlighting cultural décor and local art work. For example, the Bora Bora Suite will feature paintings showcasing the world-famous Motus, French-Polynesia flair throughout the stateroom.

The fleet expansion has allowed us to expand our itineraries and add new destinations and port of calls in Asia, in addition to the fifty countries we already sail to. The 2015 Voyage Collection will open for sale on March 24, 2014. Star Pride will cruise the exotic wonders of Asia and Arabia with a unique five voyage collection. Star Legend, sailing its inaugural voyage from Rome, Italy on May 25, 2015 will cruise new itineraries in Northern Europe. One of the voyages, Land of the Midnight Sun, will originate in Reykjavík, Iceland, a first for Windstar. Star Breeze will begin its maiden voyage from Nice, France on May 6, 2015. The yacht will spend the summer season in the Mediterranean.

“Doubling the size of our fleet gives us the freedom and the flexibility to expand our voyage collection to new destinations such as Malaysia, Singapore, Arabia, and Iceland among others; which is something our guests are asking for,” said Birkholz. “Additionally, these ships also allow us to visit beautiful new places in the Mediterranean, such as a scenic cruise down the Corinth Canal, something that was limited before due to the height of our sailing yachts.”

This is exciting news! These three new power yachts are just perfect for full-ship charter, giving planners more great options for meetings and incentives at sea.

Hi Barbara, the full Iceland itinerary will be available on our web site when our 2015 Voyage Collection opens for sale on March 24, 2014.

We offer a variety of scotch and whiskey on board but
price and availability can vary depending on when and where you are sailing.
If you send an email to [email protected] with your specific
itinerary, we would be happy to find out more details for you.

Cannot wait to get the 2015 schedule. Last July took a family cruise with eleven members, mostly first timers, thought the Greek islands to Istanbul. Everyone loved the experience and we are planning a repeat to a new itinerary in 2015′

We were on the same trip as David and his family from Athens to Istanbul and immediately booked the Tahiti cruise upon our return. We would love to see Windstar going to Australia and New Zealand which is next on our list.

Yes, the new yachts do feature balconies. The Star Pride offers 36 Balcony Suites, in addition to two Classic Suites with French doors that open onto a private veranda. You can find more information about the amenities and accommodations on the Star Pride at https://windstarcruises.com/starpride-yacht.aspx

Hi Fred, our 2015 Voyage Collection opens for sale on March 24, 2014. With the addition of our newest Star Class fleet, and the expansion of our itineraries into Europe, Asia, and Arabia, we want to make sure everything is perfect before opening our 2015 collection. Please feel free to email us at [email protected] if we can help with anything or answer any questions.

We’re putting the final touches on our new itineraries for 2015 and we plan to share them this week.

Okay; hope there are a few surprises with the new fleet members. 😉

When are the Baltic Cruises of Star Legend following?

Hi Baltic Cruiser – Here’s a link to our Baltic Delights voyages for 2015: https://windstarcruises.com/baltic-delights.aspx

Do you have dates for “Spanish Serenade” Lisbon to Barcelona trip in 2015? Don’t see them on the site.

Hi Donna – Here’s the link to our Spanish Serenade voyage for 2015: https://windstarcruises.com/spanish-serenade.aspx

Hi. Very excited to sail on Pride in August, My 12th cruise with you. Like family. I can’t seem to find any pictures of the Classic Suite..though only the Owners’ Suite. Can you help? We want to try it. Thanks!