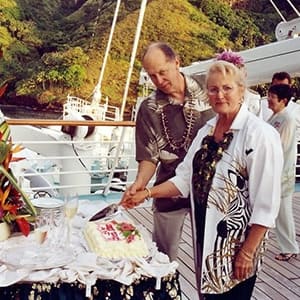 As we prepare to return to Tahiti, we take a moment to look back to the beautiful French Polynesian islands as Windstar alumni Ernst A. Kemper shares his memories of Windstar’s previous Tahitian voyages.

Our first Windstar cruise was in Tahiti on the new MSY Wind Song.  From September 1 – 9, 1989, we had Cabin 233 and shared the ship with fewer than 70 other guests.  Even then, we wanted to visit the Marquesas Islands.  So, when we learned that Windstar was leaving the South Pacific at the end of 2004, we signed on early for the last MSY Wind Star cruise (Voyage 821) from Papeete to the Tuamotu and the Marquesas Islands.  Two celebration packages were ordered for the sold-out cruise: Anniversary (our 45th) and Renewal of Wedding Vows.

Thursday, we visited the Gauguin Museum and the Artisan’s Culture Center, both located in Atuoua on Hiva Oa.  At “Centre Culturel”, we purchased a ten inch tall TIKI From “Kehuehitu Mireille”.  The Museum presented an arresting avant-garde wall projection video of Gauguin’s life.

The Welcome Ceremony on shore for Wind Star guests featured a “drum” fashioned from a “Arnott’s Cabin Biscuits” tin!  Captain Wardhaugh suggested Baie des Verges as the lovely venue for the Wedding Vows Ceremony. So at 5:30 PM, we renewed our vows with champagne and cake for all. It was a brilliant effort from Our Captain, Hotel Manager Frank Ulbricht, and Chef Zomie.

Saturday and Sunday were spent sailing for the Tuamotus and Rangiroa.  We snorkeled near Motu Nuki Nuki, Rangiroa on Monday.  Tuesday’s at-sea High-Tea was a spectacular spread of pastries, cookies and cake: exploring The Tropic Of Chocolata!

Thursday we arrived in Cook’s Bay, Mo’orea (“Golden Lizard”).  At 1:00 PM, we left on Dr. Micheal Poole’s “Dolphin and Whale Watch”.  Inside the reef, we saw the eroded tufa spires which is the source of many of the “TIKI” images.

Friday morning in Papeete, we departed MSY Wind Star at 10:30 AM, heading for the hotel.  That evening we indulged in “Mai Tai” and recalled the happy moments from the voyage.

We have learned that Windstar is returning to Tahiti after an absence of ten years!  April 13, 2014, MSY Wind Spirit will leave Puerto Caldera for a 19-day sail to Papeete.  We can’t wait for Windstar to return to Tahiti!

Live your own Polynesian Dream with 2-for1 Cruise Fares from $2,799 per person plus the convenience of our new air and hotel package from $1,999 per person.