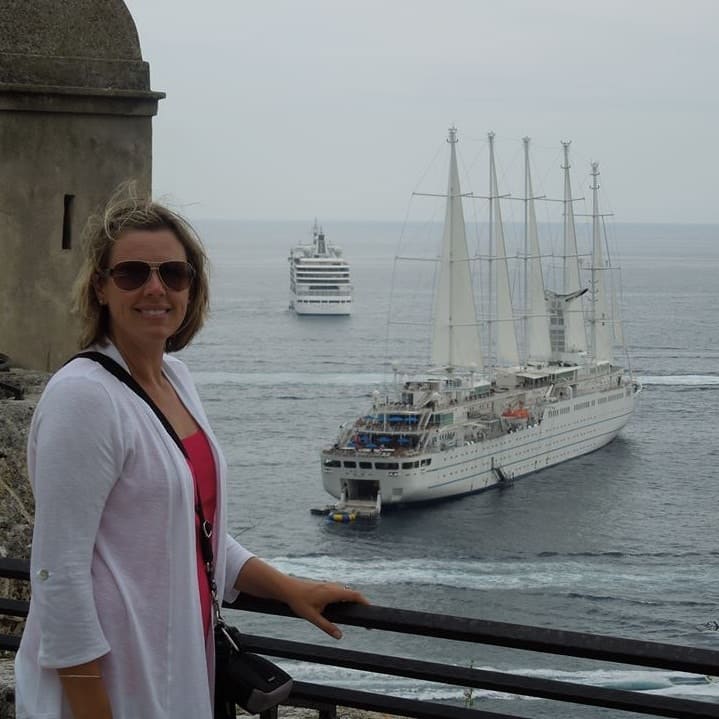 First time cruiser and Windstar fan Jennifer Covington shares the experience of her first cruise onboard Windstar’s Glitter & Glam of the Rivieras.

Last year was the year I was turning 40 and my mother invited me to be her traveling companion on the Windstar Glitter & Glam of the Rivieras voyage  from Rome to Nice, May 20-28, 2012.  I was a little hesitant about cruising, but could not pass up this fantastic opportunity.  My mother is an avid and adventurous traveler.  Yet, like me, had never cruised!  The chance to have this adventure together subsided any of our trepidation.

We flew into Rome, and spent nearly three days walking everywhere and tasting everything.  Coloseum, Vatican Museums, Pantheon and Italian FOOD!  It was everything I had hoped it would be and more.  On the first evening aboard Wind Surf during the safety and life boat training we met a few new friends.  Little did we know they would become our “double date” for the next two weeks – and friends we have remained in contact with since. Later that same evening we enjoyed our first glass of wine in the Compass Rose.  This quickly became our favorite spot to sit and relax with our new-found friends.  We were immediately impressed with the crew.  Each of them was friendly and eager to make sure we were taken care of and enjoying ourselves.

Our first port was Portoferraio on the island of Elba.  We chose a beautiful tour of a vineyard and enjoyed a gorgeous view during lunch atop a mountain.  Every view was more spectacular than the one before.  The next day we arrived at Portofino (my personal favorite port).  Portofino looks like something out of a movie or a story book.  We enjoyed a glass of wine on the waterfront as well as walking around the nearby Santa Margherita.  This was where I discovered the world’s most heavenly gelato.  Trust me; I put in a lot of time and energy doing the research.  Don’t bother trying to prove me wrong!

Next stop, Cannes! We arrived in Cannes just in time for the 65th Festival de Cannes.  We walked and explored the winding streets and shops.  We investigated each cheese shop, couture boutique and wine store with great enthusiasm.  We also chose an excursion to vineyards in Provence.  In St. Tropez we walked along the waterfront “shopping” for yachts and went on a beautiful walking tour of a nearby village.  The village truly felt like we had stepped back in time.  We did manage to conjure up enough French words to order the most delicious and beautiful bowl of mussels.  This was probably our most “French” moment!

The next morning we woke up in Monte Carlo during the Grand Prix.  We were lucky enough to have gotten tickets to the time trials.  Neither of us were race fans, but this seemed like something we couldn’t have passed up.  The cars were literally racing through the city streets at speeds I’d never seen!  The next day we enjoyed walking around the city and exploring the beautiful history.  My mom had always dreamed of seeing the cathedral.  It did not disappoint.

Our final stop was Nice.  We were excited to spend three days in this beautiful city.  However, it meant leaving Wind Surf.  I wasn’t sure what I would miss most, the breakfasts on the top deck with beautiful views each morning, our dinners full of laughter and wonderful wine, the super talented onboard entertainment, or the friendly crew.  I had been so afraid of going on a cruise, but now I didn’t want it to end.  We immediately began talking about our next cruise as we explored the beautiful beaches, patisseries, and markets of Nice.  We still talk about our experiences often.  It was truly the trip of a lifetime!

Interested in sharing your cruise vacation story with our readers? Send along your short cruise and/or shore excursion reviews; an anecdote (something special that may have happened on your cruise); or perhaps something off the beaten path you found interesting in port (good restaurant, market, shop, etc…). Be sure to include any photos you may have depicting your cruise. Please email [email protected].